Bullying others to show superiority

Frederick Dukes, better known as the Blob, is an antagonist in Marvel Comics. He is a mutant who has acted as an enemy of the X-Men for a considerable length of time. A bully by nature, he likes to think with his fists and is in many ways nothing more than a super-powered thug who rarely has plans of his own and rather works as a henchman for a more powerful villain, though despite his thuggish nature he has a long and loyal friendship with fellow X-Men villain, Unus and will often ally with Unus out of true companionship rather than opportunity (see the "Friendship with Unus" section for more on this unique factor to Blob's otherwise distasteful self).

Originally a circus performer he was invited to join the X-Men but refused and became a threat almost at once, later he would join with the Brotherhood as an ally of Magneto and other criminal mutants - Blob seemed to take pleasure out of his fights with the X-Men but ultimately quit the Brotherhood after he realised that Magneto didn't care about him, since during a fight Magneto sent an array of torpedoes at the X-Men with no care as to the fact Blob was in the crossfire.

He would then join with Unus the Untouchable, another criminal mutant, and together they attempted to frame the X-Men for a number of robberies (though they were being manipulated by the villain Lucifer).

Despite this Blob and Unus became good friends and the two would later join the Factor Three, an organisation seeking world conquest - however both villains eventually allied with the X-Men to defeat the team's leader - the Mutant Master, after they realised he was simply using them to further his own goals.

Blob would then rejoin the Brotherhood alongside Unus and the Mastermind and once again fought against the X-Men, this time inside an illusionary circus.

After a failed attempt at convincing Beast to join the Brotherhood via manipulation Blob decided to reform the Factor Three and attempted to recruit mutants via kidnap and other illegal means - once again, Blob's bad luck came back with a vengeance however as he and his team mates ended up captured by the Secret Empire and had to be rescued by the X-Men, Captain America and the Falcon.

Return To The Brotherhood

After this Blob once again joined the Brotherhood and caused more trouble for the X-Men, though his luck never did improve much and he continued to have many misadventures throughout his career - though he always kept coming back, proving he was nothing if determined.

In the Ultimate universe Blob is still an obese mutant and a villain but has developed a disturbing trait not seen in the mainstream version, namely the practice of cannibalism. This leads to his demise when he dines on the corpse of Janet Van Dyne, the Wasp, enraging her lover, Giant Man, who at giant size bites his head off. Later still, he is revealed to be the father of Liz Allan, who in this case becomes the Ultimate version of Firestar.

In the movie, Fred Dukes was a member of William Stryker's team, but left the team in disgust. Six years after Wolverine left the team, Dukes developed an eating disorder, and in the process gained a few hundred pounds. In order to find Stryker, Wolverine had to fight Fred in a boxing match. It seemed that Fred was about to win until Wolverine smashed his head into Fred's head, knocking him out. When Fred regained consciousness, he told Wolverine that a mutant name Gambit had escaped, and that he can take Wolverine to the Island. However, Sabretooth revealed that he just killed Dukes afterwards for revealing the information to Wolverine, much to the latter's horror and disgust.

He is portrayed Kevin Durand.

In the videogame of the same name, Fred Dukes has a slighlty different role. Instead of fighting Blob in a boxing arena, Wolverine fight him in a grocery store. Wraith mentions that Dukes develops a "bit" of an eating disorder. Because of that eating disorder, Dukes gained about 600 pounds and breaks into grocery stores just to eat. After he was defeated Dukes told Wolverine about the Island, and that it was a prison for mutants. He also mentioned the same thing about Gambit and that he escaped. 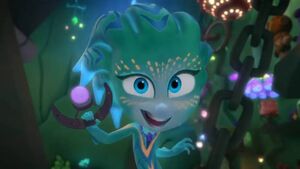 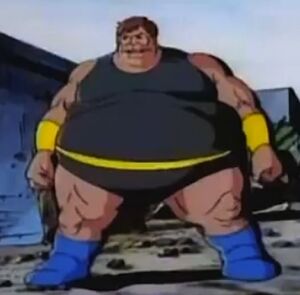 Blob in the X-Men animated series 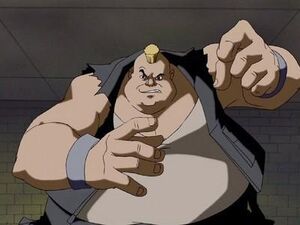 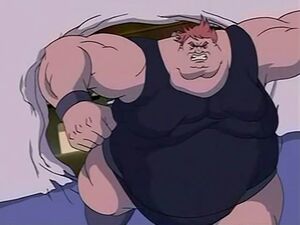 Blob in Wolverine and the X-Men 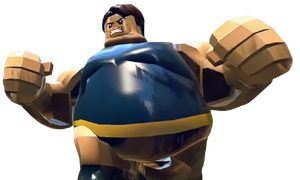 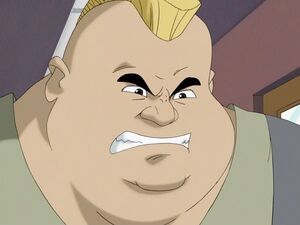 Blob staring angrily at Duncan Matthews for making fun of him in X-Men: Evolution.