Blocky is one of the kids/teens or one of the 20 contestants on Battle For Dream Island, He is a prankster who loves bullying kids and objects, and has no devote for others.

He even stars in his own show called Blocky’s Funny Doings Interaction, regrading his mischievous behavior

Due to his sadistic personality, Blocky is launched away along with most other objects throughout the second season, however, they were shown very occasionally

He is vocied by Michael Huang, who also vocied Four

He is a red block

In Battle for Dream Island, Blocky is shown to be a reckless prankster, bully, sadist, and a murderer. He constantly picks on and kills various people whenever given the chance, like kicking Woody, throwing Ice Cube off a ledge, and extinguishing Firey repeatedly. These attacks are often seen as pranks on his end, but they usually are at the expense of other people's well-being. Blocky hardly shows remorse for his actions, and is rarely social to people outside of his friend group.

However, he was a sensitive individual sometimes.

In Battle for BFDI, Blocky's personality changes. He's a lot less violent towards others, killing people less often. He can still be pushed, like when Golf Ball tries to manage him, causing Blocky to break her in half. He's also more social and empathetic, standing up for Grassy when Golf Ball mistreated him, or worrying when Four was gonna come back. Blocky still wishes he could return to pranks, but he acknowledges the improbability of the prospect and shows restraint. 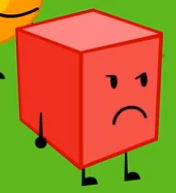 Retrieved from "https://villains.fandom.com/wiki/Blocky_(BFDI)?oldid=3533952"
Community content is available under CC-BY-SA unless otherwise noted.