Villains Wiki
Register
Don't have an account?
Sign In
Advertisement
in: Doctor Who Villains, Female, Aliens,
and 14 more

Member of the Slitheen family

To destroy Earth and sell it's remains as fuel (failed).

To escape Earth by using the energy of a nuclear power plant to interact with the Cardiff space rift (failed).

Blon Fel-Fotch Passameer-Day Slitheen (also known as by her human alias Margaret Blaine) is a member of the Slitheen a family of alien criminals and appears as the secondary antagonist in season one of the revival series of Doctor Who. She appears in the episodes Aliens of London and World War Three as the secondary antagonist and Boom Town as the main antagonist (making her the most recurring Slitheen in the franchise alongside Korst Gogg Thek Lutiven-Day Slitheen).

Not much is known about Blon's earlier life but it is known that she was born on the planet Raxacoricofallapatorius into the Slitheen family. She did not want to take part in her family's criminal activities but was made to carry out her first hunt when she was thirteen and knew that if she refused, her father would have fed her to Vernom Grubs, whom the Slitheen used to dispose of unwanted family members.

It is also known that Blon's mother tried to kill her several times.

Blon along with her brother and commander Jocrassa and other members of the Passameer-Day branch of the family came to Earth in 2006 and disguised themselves as members of parliament using skin suits made from the skins of the politicians.

Using the skin of a member of MI5 named Margaret Blaine, Blon aided her family in their plan to start a nuclear war on Earth in order to devastate the planet and sell the remaining chunks as fuel. This plan failed when Mickey Smith on the Ninth Doctor's orders fired a missile towards the Slitheen's base at 10 Downing Street and blew it up, killing the aliens inside.

It was later revealed that Blon (still in the body of Margaret Blaine) had survived this incident by teleporting away seconds before the missile struck, but this was a one person teleporting device so she was unable take the other Slitheen with her. She arrives in Cardiff where she is made Mayor and makes a plan to build a nuclear power plant called Blaidd Dwrg (Welsh for Bad Wolf) where she would cause an "accident" so near a space rift there that it would destroy Earth and would provide her extrapolator significant power that she would "surf" into space to find any surviving members of her family.

She would kill anyone who questioned her plans, but in a rare moment of kindness, she spared a pregnant journalist named Cathy Salt who reminded her of her own lost family. The Doctor and his companions Rose Tyler, Jack Harkness and Mickey Smith arrived to stop her. Jack confiscated her extrapolator and refueled the TARDIS quicker whilst the Doctor was uncertain what to do with Blon as she was sentenced to death on her home planet Raxacoricofallapatorius. Blon pleaded the Doctor for mercy and clemency but when the extrapolator began to open the rift through the TARDIS, Blon threatened Rose and made Jack place the extrapolator at her feet. When the extrapolator began to tear apart the TARDIS, it's heart opened and Blon looked into it and was changed back into an egg (possibly meaning that the heart saw that Blon did want to change and decided to give her a second chance at life) which the Doctor and the others took to Raxacoricofallapatorius to give to a more good-natured family.

Afterwards as revealed in the Doctor Who comic "A Confusion of Angels", Blon was adopted by another Raxocoricofallapatorian family called the Jingatheen and was renamed Margaret Ag-Kris Therur-Ford Jingatheen and grew up to become a Detective Inspector and worked for the Shadow Proclamation. 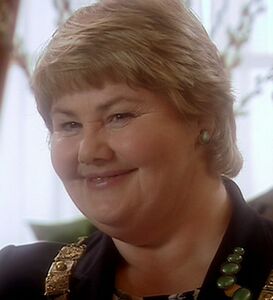 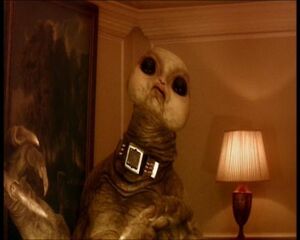 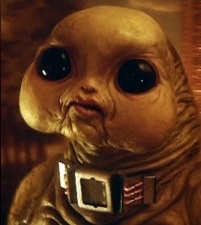 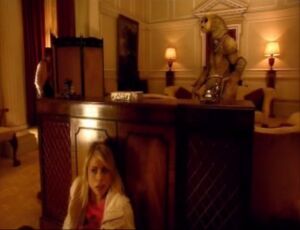 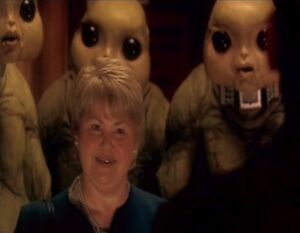 Blon (as Margret Blaine) reveals the Slitheen's plan to the Doctor 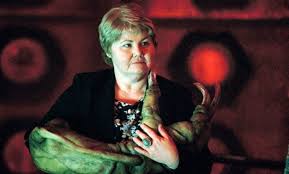 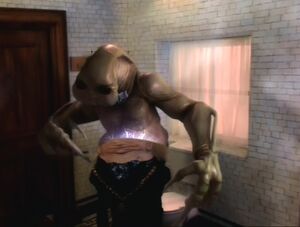 Blon Gets Out Of Her Skin