The Blond Men are the main antagonists of the Regular Show episode "Bet to be Blonde". They are blond-haired people who wear light gray shirts with blue blazers, dark gray jeans, and black shoes.

When Mordecai loses a bet to Rigby to have a Blond haircut for a week if he loses a video game he and Rigby were playing. At first Mordecai starts to hate it but then he meets the Blond Men and they start to hang out together. Rigby starts getting jealous and resentful towards the Blonds and Mordecai until Mordecai decides to move out of the house and in with the Blonds. Rigby tries to stop him but gets knock out and bagged, when Rigby wakes up he finds himself in the Blondes lair and tied up.

Mordecai states that in order to join the Blondes he has to Blonde and outsider, Rigby was about to get Blonde until he reveals that he cheated on the bet. Mordecai then reveals he knew that Rigby cheated and that he was wearing a wig the whole time. This makes Rigby happy and questions if the Blond Men were actually guys in wigs trying to teach him a lesson, but Mordecai reveals that they are actually a secret evil organization and they start to run.

The Blond Men start chasing and attacking Mordecai and Rigby and soon come face to face with their leader. The whole evil cult was destroyed when Mordecai set off one of their rings to self-destruct and it exploded by liquid hydrogen. The Leader wore 10 rings on each finger (excluding his thumbs) and the words "BLOND 4 LYFE" tattooed on them on 10 fingers.

The Blond Men except for their leader were revived by Garrett Bobby Ferguson Jr. in "Exit 9B", fortunately, they were sent back to Hell in the end. 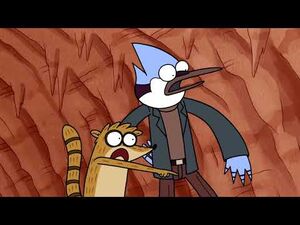 Regular Show - Mordecai And Rigby Escape From The Evil Blondes