Making sure he is better than his good counterpart and parent

Commit crimes on his master's behalf

Blood Falcon is a major antagonist in the F-Zero series, making his debut in F-Zero X. He is a clone of Captain Falcon who was created by Black Shadow, who instructed him to commit crimes. His age is four biologically, but is stated to be 37 physically. He drives the F-Zero Machine known as Blood Hawk.

Blood Falcon is voiced by Eric Kelso in F-Zero GX and by Banjō Ginga in F-Zero: GP Legend.

Blood Falcon bears a huge resemblance to Captain Falcon himself. He, however, has a red outfit with gray boots. His helmet is purple with a silver skull in place of a falcon, and he wears purple gloves, a large collar, a brown belt with a gray buckle, a large metal shoulder-guard, and a yellow scarf.

Blood Falcon is eventually defeated because his master had taken a large chunk of the Blood Hawk's grip away as a trade off for boost, giving the Blood Falcon a low-traction, fast car which ultimately led to his defeat.

The Blood Falcon costume returns in this game, alongside his first appearance as a trophy and also having a sticker of him that grants Captain Falcon stronger attacks when used.

Captain Falcon's Blood Falcon themed alt returns in both games, but only in Super Smash Bros. For Wii U does Blood Falcon have a trophy.

The Blood Falcon costume returns once more in Super Smash Bros. Ultimate, as well as Blood Falcon having a spirit. Blood Falcon's spirit is a Ace-level Attack spirit, making the user faster if used. His spirit battle has the player fight two Captain Falcons on the Port Town Aero Dive stage, with the two Captain Falcons preferring to use their stronger specials and moving faster than usual. 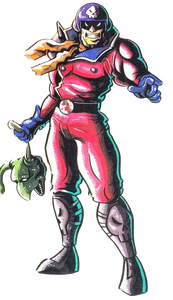 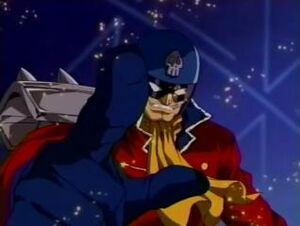