Killing his victims in their dreams (particularly children).

Invade the dreams of his victims and kill as many as he can and cause as much pain as possible in the town he once haunted.

The Blood Red Sandman is the protagonist villain of the song of the same name by the Finnish band Lordi.

Not much is known about the Blood Red Sandman other than that he is a supernatural serial killer who comes out at night and seems to target children and kill them in their sleep as he invades their dreams. He then turns their dreams into what he calls The Monsterican Dream (which is also the title of the song's album). People who knew of his crimes called him "The Leather Apron" as well as "Smiling Jack". It's implied that his weapon of choice is, or at least similar to, a saw blade. According to him, he is coming back to the town he has haunted before to once again cause as much pain as possible.

The music video for the song does not actually feature the character himself, but instead pays homage to the Evil Dead films. During the video, a trio of young people sort through old belongings in a shack at night. The door swings open, and they find a box containing a drawing of the lead singer, Mr. Lordi, the doll from a music video for another one of the band's songs, 'Would You Love a Monsterman?' and a tape, which starts to play when they plug it in. The male is throttled by an invisible force, (which is one of the band members, Kalma, who can only be seen through the super 8 film camera the male drops) and thrown onto the floor, knocked unconscious. One of the females is also dragged into the closet by the guitarist, Amen. The band then appears, and, magically chaining the remaining female to a rocking chair, continue to sing the song. Her friends appear again, as zombies, who join in singing the song. The band continues until the the woman unplugs the cassette player with her foot. She opens her eyes, only to find the band and zombies have disappeared, and she is no longer chained to the chair. As she gets up off the chair and looks around, Mr. Lordi attacks her from behind (seen through the lens of the camera) just as the camera runs out of film.

There has been much speculation as to who or what the Blood Red Sandman is:

The Blood Red Sandman in the booklet for the Monsterican Dream album. 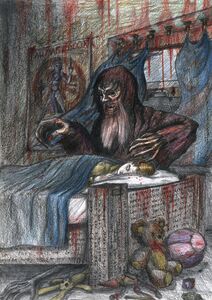 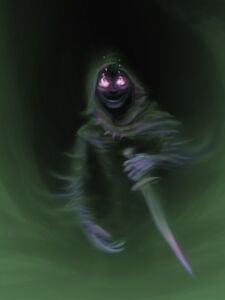 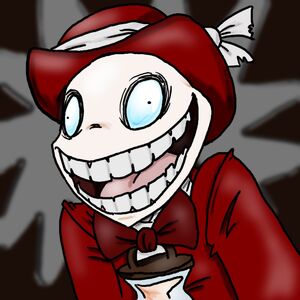 Smiling Jack
Add a photo to this gallery 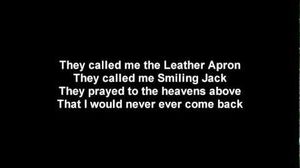 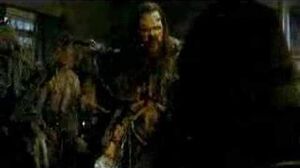 Lordi "Blood Red Sandman"
Add a photo to this gallery
Retrieved from "https://villains.fandom.com/wiki/Blood_Red_Sandman?oldid=3903646"
Community content is available under CC-BY-SA unless otherwise noted.