General of the Confederate States Army

General Bloodbath McGrath is a supporting antagonist of the 1999 film Wild Wild West. He is an ex-Confederate general who was working for Arliss Loveless in the Loveless Alliance's plot to overthrow the United States government and divide the nation amongst themselves.

He was portrayed by Ted Levine, who also played Buffalo Bill in The Silence of the Lambs, Rusty Nail in Joyride, General Russell Woodman in Evolution, Karkull in Superman: The Animated Series, and Ken Wheatley in Jurassic World: Fallen Kingdom.

McGrath used to serve as a member of the Confederate Army during the American Civil War, serving as the right-hand of General Robert E. Lee. During the last days of the war in 1865, a terrible tragedy struck when a steam-power machine was used to take down a town called New Liberty, which has killed hundreds of freed slaves, including the biological parents of U.S. Army Officer James West. McGrath then seemingly took credit by dubbing himself as the Butcher of New Liberty, which motivated an angry West to track him down and kill him in revenge for the loss of his family. However, it turns out that Loveless was the one responsible for the massacre as he personally manned the machine there and convinced McGrath to take credit for it.

Eventually, General Lee and McGrath surrendered to General Ulysses S. Grant in Appomattox, which led to the dissolution of the Confederacy.

4 years later in 1869, West hides in a railroad water tower while spying on a group of ex-Confederate soldiers working under General McGrath. West follows them to a saloon where McGrath is enjoying a loud party while having his men to deliver more weapons to Loveless. At the saloon, McGrath is being seduced by a large prostitute who attempts to hypnotize the general into divulging his plans.

West breaks in to kill McGrath, but is stopped by the prostitute, allowing McGrath to escape along with Mr. Hudson. West fights off McGrath's men and finds himself with the prostitute, who reveals himself as U.S. Marshal Artemus Gordon. In Washington, D.C., West and Gordon meet at the White House with Ulysses S. Grant, who serves as the current President and tells them about the disappearance of America's key scientists. Grant charges the two with finding the scientists before he inaugurates the first transcontinental railroad at Promontory, Utah.

Deducing McGrath's current location in New Orleans, Gordon and West track him down to a mansion where Loveless is hosting up a costume party for the elite of Southern society. Under Loveless' orders, McGrath directs all of his remaining soldiers to Malheureux Point for a weapons demonstration. Following the death of Mai Lee East, Loveless' mistresses (Munitia, Amazonia and Miss Lippenrieder) oversee the unveiling of Loveless' new weapon: a steam-powered tank, which Mr. Hudson uses to massacre all of McGrath's soldiers (including their horses) to their deaths, similar to how Loveless murdered the freed slaves in New Liberty.

Realizing that he and his men have been betrayed, McGrath angrily demands Loveless to stop the slaughtering, but Loveless angrily refuses by using the Appomattox surrender as an excuse to justify his actions. Having had enough, McGrath attempts to shoot Loveless, but the latter uses a gun hidden inside his wheelchair to shoot McGrath. Loveless then orders his mistresses to dump McGrath's body in the water before they all leave for Spider Canyon.

As West arrives to the scene with Gordon and Rita Escobar, they are horrified to see all of the soldiers' corpses (along with the horses). West then spotted a dying McGrath near the waters, where McGrath finally admits to West that Loveless was responsible for the massacre at New Liberty before succumbing to his wounds. Showing nothing but pity for the dead McGrath as he was nothing more than a pawn used by Loveless, West angrily swears to kill Loveless for this. 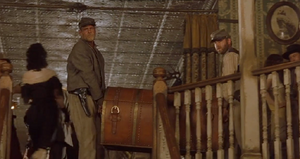 McGrath having two of his soldiers to deliver weapons at a saloon. 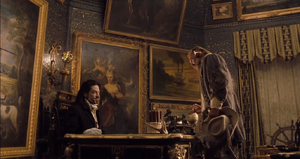 McGrath meeting up with Loveless for the weapons demonstration. 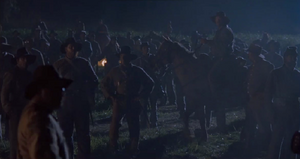 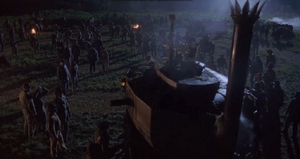 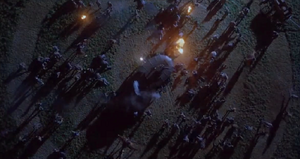 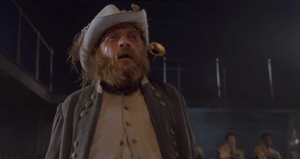 McGrath being horrified to see his men being slaughtered by Loveless' tank. 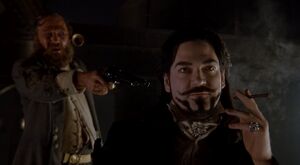 McGrath attempting to kill Loveless for his betrayal, to no avail. 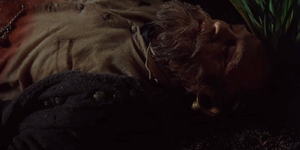 McGrath succumbing to his death after being shot by Loveless.