Bloodsail Hold on the Plunder Isle

Being both bloodthirsty and depraved
Mastery at naval warfares
1,200 strong pirate members
Possible for players to becomes allies with these swashbuckling scoundrels (though at a heavy price)

The Bloodsail Bucaneers are a faction of bloodthirsty pirates in World Of Warcraft and the hated foes of the Booty Bay goblins - although normal hostile to players it is possible for players to becomes allies with these swashbuckling scoundrels: at a heavy price however as it requires killing many goblins and a lot of grinding (even more so if one dares to attempt an achievement known as "Insane In The Membrane).

As for the Bloodsail Bucaneers themselves, they are basically what you would expect of pirates - looting and pillaging is a way of life for these criminals and as stated above they loath the Booty Bay faction above all else, come the release of Cataclysm it is expected that rivalry between the two factions will increase even further with the Bloodscail Bucaneers all but declaring all-out war on Booty Bay.

Duke Falrevere runs the Bloodsail Buccaneers and is usually sailing the seas on his flagship called the Devil Shark. three commodores assist him, each of whom is in charge of about a dozen pirate ships. Fleet masters command smaller groups of ships, captains command individual ships, and their first mates take over when they fall. Most of the Bloodsail elites are former members of Falrevere’s estate — knights, reeves and the like who joined him in his exile.

When a commodore falls, Falrevere personally selects a replacement. He picks those he trusts; loyalty is more valuable than skill, for Falrevere knows what an odious bunch he commands and realizes the potential for mutiny and betrayal. However, his experience as a noble proves valuable in his new role, and while he has become a thoroughly unpleasant individual he keeps his men and women well fed with food, plunder and blood, and so most are glad to have him at their head.

And imagine the most bloodthirsty, depraved and thuggish person: That person is probably a member of the Bloodsail Buccaneers. About half the Buccaneers are remnants of Falrevere’s original crew that betrayed Lordaeron and Kul Tiras for a life of piracy; the remaining members come from waterfront saloons and docks. The Bloodsail Buccaneers are not above press-ganging people into their service. A ragtag band of amoral killers and pillagers And members revel in their reputations.

As Falrevere has a reputation for treating his people reasonably well, new members are in ready supply: at least, they’re enough to replace the buccaneers who die on their missions. These are people with various reasons to join: those who have nowhere else to go, or those who simply enjoy bloodshed and the seas, or those who want to vent their hatred toward the world, or those looking for an easy gold piece. The Buccaneers don’t try to train new members (though a few individual captains implement such schemes); for the most part, the life of a new Bloodsail Buccaneer is, often literally, sink or swim.

Falrevere and his pirate followers blame the fall of Lordaeron and the rise of the undead on other races like orcs and elves. That’s why they act so violently towards all other races despite having moderate quantity of them in their ranks, and have cultivated their own exclusive group. 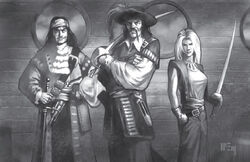 Members of the Bloodsail Buccaneers. 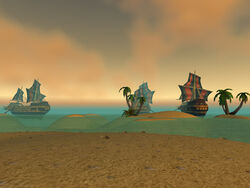