Criminal
Bloodsport is the name of three DC Comics supervillains, all of them are enemies of Superman. Bloodsport was created by John Byrne and first appeared in Superman Vol #4 (1987).

Robert DuBois was born and raised in Metropolis, and albeit not much is known about his family, he grew up with his brother, Michael “Mickey” DuBois, and the two of them were very close. As a young man, DuBois was drafted, as many others, into the US Army to go to Vietnam. Robert didn’t have any particular moral objection to the war, but he was afraid of dying nevertheless: rather than joining his peers on the battlefield, he preferred to flee to Canada. What he couldn’t imagine was that Mickey, wanting to save his brother’s honor, reported for induction in his place, pretending to be Robert. Mickey went to war in his brother’s place, but in Vietnam he was terribly wounded, and lost both arms and legs. As soon as he knew what had happened, Robert went mad with guilt: he blamed himself for what had happened to his brother, and quickly went insane. He became obsessed with Vietnam, and subjected himself to an intensive training as if he was actually going to war. He was locked in several psychiatric hospitals in Canada, but no doctor could help him with his fixation. Then, one man came with a “solution”: Kimberley, so he introduced himself, played with his obsessions, convincing DuBois that a new war had to be fought, one even more important than Vietnam, a war for humanity. The enemy was but one: Superman, the alien that was humiliating humanity with every single breath he took. Kimberley equipped Robert with an arsenal of futuristic weapons, weapons he could access to thanks to a teleportation device, and sent him to Metropolis to fight the war he never attended to.

As it’s easy to guess, the entire operation was orchestrated by Lex Luthor, but the mastermind failed in underestimating DuBois’ madness. Finally with guns in hand, Robert renamed himself Bloodsport, and became convinced that he was a war veteran. Shouting that he had been wounded along with his brother in Vietnam, Bloodsport started shooting on civilians guilty of “wasting” the freedom he and his brother had been fighting so hard for. Before Superman arrived, he had already killed 25 innocent bystanders. The Man of Steel, however, was caught off-guard the moment Bloodsport shot him with a gun equipped with Green Kryptonite ammo. Badly wounded, the hero was saved only by the photographer Jimmy Olsen, who held Bloodsport at gunpoint long enough for Superman to escape and look for medical attention. In the meanwhile, even Lex Luthor had become horrified by the useless carnage, and he had his men rescue Olsen and help him track down the one man who could put a stop to Bloodsport’s mayhem: his brother Mickey. As soon as his adversaries vanished, however, Bloodsport resumed his man-hunt, until Superman came back once again, after having received some medical treatment. Realizing the psycho was using a teleporting device to summon his weapons, the Man of Steel used his heat vision to ionize the air around Bloodsport’s gloves, thus preventing him from teleporting any other weapon, but the madman then threatened to detonate his backpack, in a blast that would have destroyed half of the city. Luckily, Jimmy Olsen arrived right in that moment, along with Mickey on a wheelchair. The veteran begged his brother to stop and Bloodsport, upon seeing him, surrendered, once again guilt-ridden. Arrested, Robert DuBois was sent to Stryker’s Island Penitentiary, but this wasn’t the last time people trembled at the name of Bloodsport.

The second Bloodsport was Alexander Trent, a fanatical racist and member of the Aryan Brotherhood. Alex was created by Karl Kesel and Barry Kitson and first appeared in Adventures of Superman #507.

The third Bloodsport was created by Kurt Busiek, Geoff Johns, and Peter Woods, and first appeared in Superman #652. 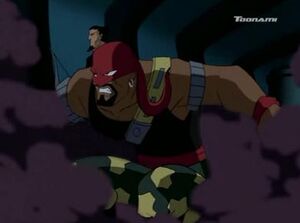 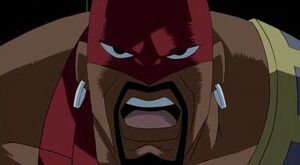 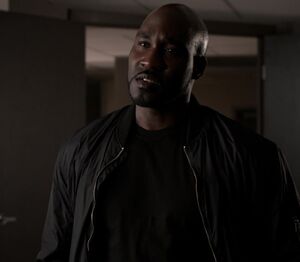 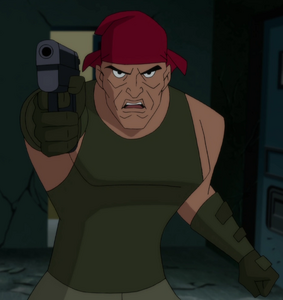 Retrieved from "https://villains.fandom.com/wiki/Bloodsport?oldid=3456942"
Community content is available under CC-BY-SA unless otherwise noted.