Monster from the closet

The Bloodsucking Freak is the main antagonist of the poem A Nauseous Nocturne, written by Bill Watterson, and possibly the overarching antagonist of the comic strip Calvin and Hobbes, which the poem is based upon. He is a imaginary monster living in Calvin's closet.

The Bloodsucking Freakt only comes out at night when Calvin is trying to sleep. As it is dark in the room, its actual look is unknown. However, according to illustrations and description from the poem, it has blood-red eyes, tentacles, claws, "throbbing, pulsing ventricles" and "mucus-oozing pores".

It wants to do the same thing as the monsters under the bed, being to eeat Calvin. It devour helpless children in their beds, chews them up and sucks their bones, listening to their moans cheerfully.

When it comes out from the closet to eat Calvin, he looks for some weapon, but their is none. He then thinks about his terrible fate and his parents who will find his remains in the morning. Luckily, the Bloodsucking Freak then notices there is Hobbes in bed along with Calvin and, scared of an animal, it returns to the closet, leaving Calvin alone. 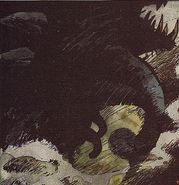 Another picture of the Bloodsucking Freak.
Add a photo to this gallery

Retrieved from "https://villains.fandom.com/wiki/Bloodsucking_Freak?oldid=4165057"
Community content is available under CC-BY-SA unless otherwise noted.