The Adventures of Puss in Boots

Source of all fear

The Bloodwolf is the main antagonist of the Dreamworks Puss In Boots franchise and appears in the series The Adventures of Puss in Boots. He is a wolf god that has apparently existed before time that wishes to destroy Earth. However, he met and became the arch-nemesis of the Great Mage Sino before being banished to the Netherworld.

He was voiced by Clancy Brown, who also played Byron Hadley in The Shawshank Redemption, Surtur in Thor: Ragnarok, Evil Entity in Scooby-Doo! Mystery Incorporated, Mr. Krabs in the SpongeBob SquarePants franchise, Blackhand in Warcraft, The Kurgan in Highlander, Viking Lofgren in Bad Boys, Hades in the God of War videogames, Undertow in Disney's The Little Mermaid II: Return to the Sea, Dr. Neo Cortex and Uka Uka in the Crash Bandicoot franchise, Dark Dragon in American Dragon: Jake Long, Savage Opress in Star Wars: The Clone Wars, Silas in Transformers Prime, General McGuffin in Wander Over Yonder, General Wade Eiling in The Flash, Gunmar in Trollhunters, Harry Bordon in Cast a Deadly Spell, Parallax in Green Lantern, and Lex Luthor in the DC Animated Universe.

The Bloodwolf is extremely ruthless, as he tortures the innocent inhabitants of San Lorenzo with their greatest fears and threatens to destroy all life on the Earth by destroying the planet. He also seems to hate saying positive words, as when Uli reveals to the Bloodwolf that he helped him return from banishment, he seems to strain saying the word "grateful". Similar to other demonic or evil gods, the Bloodwolf sees the main heroes, the Senior Puss Squad, as nothing but insects that are beneath him, ignoring Puss while he is attempting to attack the demonic wolf with his sword while the Bloodwolf himself is merely watching the other members of the Senior Puss Squad fight his avatars. The only thing the Bloodwolf seems to fear is Sino's Amulet, as he is quick to declare that Dulcinea must die before firing lightning at her when he sees her holding it.

The Bloodwolf takes the form of a big, anthropomorphic and bulky grey wolf with a red glowing sclera. He also wears golden rings similar to those worn by Egyptian Pharaohs and Gods. In fact, the Bloodwolf looks similar to the Egyptian God Anubis, the God of Mummification and the Afterlife, and the once Egyptian God Wepwawet, who was once seen as the God of War before being downgraded to a mascot of the Pharaohs.

The Bloodwolf has existed before time itself, and not much is given about his backstory.

Without the Bloofwolf's knowing, a cult who worshipped him called the "Ancient and Terrible Order of the Bloodwolf" was formed. This cult was extremely knowledgeable about him, including on how to bring him back from the Netherworld, all his greatest strengths and even all his greatest weaknesses. The only character who appeared in the show who was part of the cult was Uli.

The Adventures of Puss in Boots

The Bloodwolf doesn't appear at all in these two seasons. However, he is commonly mentioned, and even a giant statue of himself is under San Lorenzo for the rest of Season 2, 3 and 4.

The Bloodwolf is still occasionally mentioned until the final episode of Season 4.

The Bloodwolf is released, and although he is still chained to the Netherworld, he is quick to break the chains, completely freeing himself from the Netherworld in the process before roaring. Puss accidentally drops his sword and the Bloodwolf notices him. The Bloodwolf then asks Puss if he is the One from the Great Prophecy. When Puss stammers, the Bloodwolf chuckles before saying that he knows Puss fears him, that he is the source of all fear and when he is done with Earth, fear will be the only thing left. Puss tries to tell the Bloodwolf and himself that he is not afraid of him, however the Bloodwolf shouts that Puss does fear him before attacking him and throwing Puss away before throwing a rock at him.

Uli arrives and tells the Bloodwolf how he had helped him return from the Netherworld. The Bloodwolf then reads Uli's Mind before dropping him, telling Uli he has seen what he has done before asking Uli if he should be grateful. Uli says he doesn't want much, but asks the Bloodwolf if he can rule what remains of the Earth when he decimates it as a mighty warlord. The Bloodwolf thinks about it for a few seconds before saying "No" and using his Telekinesis to throw Uli into the wall. The Bloodwolf then tells Uli he will be destroyed, then tells everyone else both the same thing and that the Earth will be no more before laughing and sending his smaller Bloodwolves after the innocent inhabitants of San Lorenzo.

The smaller Bloodwolves come to help their master while the other members of the Senior Puss Squad watch in utter shock that Puss is fighting the seemingly impossible-to-defeat god. Puss' courage reignites their will to fight before they go to distract the smaller Bloodwolves so Puss can fight the Bloodwolf alone.

Soon, other inhabitants of San Lorenzo begin fighting and distracting the smaller Bloodwolves while Puss himself continues to fight the Bloodwolf. However, their distractions seem to be in vain as the Bloodwolf is almost completely ignoring Puss and focusing more on the fight between San Lorenzo and his smaller Bloodwolves. He then tells Puss that his courage is impressive and says that it’s almost a shame that Puss still doesn't have a chance. Puss tells the Bloodwolf to keep talking and that he will find a way past his defenses. Puss then attempts to attack the Bloodwolf at his snout, however the sword he has been using since the beginning of his adventures in San Lorenzo snaps, and to add even more salt to Puss' wounds, the blow that sacrificed Puss' sword merely made the Bloodwolf scratch his nose in slight irritation. The Bloodwolf then exclaims that he has no more time for Puss and that the Walpurgisnacht Blood Moon will soon rise and it will be time for the Earth to end. He then sadistically states that he will taste the screams of dying as the world ends.

The Bloodwolf then decides to finish the battle by summoning red lightning and blasting all of the members of the Senior Puss Squad with it. The Bloodwolf then tells Puss to see that he had no chance and once again mockingly tells him that he is not the One. Puss says that he knows, that the One is dead because of Uli. The Bloodwolf then says that the Blood Moon will soon rise, and with the One dead, there is no one to stop him before once again starting to laugh. However, the Bloodwolf is cut off when a bright light appears. The bright light is revealed to be Dulcinea, the One from the Great Prophecy. The Bloodwolf looks daggers at her, but when he notices Sino's Amulet, he quickly begins firing lightning at her. Sino's Amulet creates a blue forcefield that protects her from the Bloodwolf's onslaught, but the Bloodwolf's lightning eventually pushes Dulcinea into the bridge and causes the bridge to crumble as he once again begins laughing.

Once Dulcinea tells the Senior Puss Squad how to defeat the Bloodwolf, they all team up and use their powers together to defeat the godly wolf. El Gaunte strikes the Bloodwolf with Goodsword, the Duchess pushes him back with her Telekinesis and Sphinx temporarily blinds him with her magic. Golem then goes to punch him, but looks in fear as the Bloodwolf is unaffected and simply jabs Golem, forcing him back a few feet. Golem doesn't give up though and punches the Bloodwolf in the face a couple of times before Golem and the Bloodwolf lock their fists into each other, with one trying to push the other back, and both are seemingly at equal strength. The Duchess then electrocutes the Bloodwolf, but that still doesn't give Golem the upper hand. The Bloodwolf then once again begins firing lightning at the Senior Puss Squad, but when Golem comes up to punch the Bloodwolf, he blocks it with his hand before turning Golem onto his back. He then stomps on Golem's face before he throws Golem far away from San Lorenzo.

The Bloodwolf then spots the Blood Moon and believes he has won, telling everyone that their world ends now. However, Puss uses his broken sword to push a big rock on top of the Bloodwolf, seemingly defeating him. However, the Bloodwolf proves them wrong once he throws the giant rock away from him. He then proclaims himself death and the destroyer of worlds. About to destroy Earth, Puss jumps on the Bloodwolf and momentarily distracts him long enough for Dulcinea to activate Sino's Amulet before saying goodbye to Puss and then runs and jumps to touch the Bloodwolf. He notices, but doesn't have enough time to react as he screams before Uli saves the Bloodwolf from the amulet, pushing Dulcinea away. The Bloodwolf muses over how Uli still tries to please him and asks Uli if he has learnt nothing, Uli responds that he has learnt to do good before touching the Bloodwolf's snout with the still activated amulet, banishing the Bloodwolf to the Realm of Shades along with himself. Before Uli is fully banished, however, he apologizes to Dulcinea.

The Bloodwolf and Uli then land in the Realm of Shades version of San Lorenzo where he meets Orange, who tells him that the Realm of Shades is his new home for all eternity, the Bloodwolf responds that she can’t keep him here and that he will destroy her. However, his claws go straight through her body, Orange then disappears and says the two Tulpas are still remaining. The Bloodwolf then screams in frustration and hits the grey ground with his fist, with Uli assuring him that he will be there to entertain him forever and ever and ever and ever. Realizing he’d be possibly stuck here with Uli for all eternity, or at least a really long time, the Bloodwolf screams at the grey sky.

In these two seasons, the Bloodwolf is only mentioned, and it's revealed that he had taken over the Netherworld when he was banished there.

After his first banishment, the fear he would return made Sino make the Realm of Shades. After the realization hit Puss that the Bloodwolf was making his slow return from the Netherworld, he almost completely quit being a hero and even wanted himself to be locked up, and his statue caused the Mole King and his army to come and terrorize San Lorenzo. After his second banishment, Puss once against almost quit being a hero, and other banished beings from the Netherworld come out of the giant crack made by the Bloodwolf and ultimately caused the Senior Puss Squad to disband. 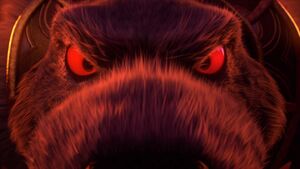 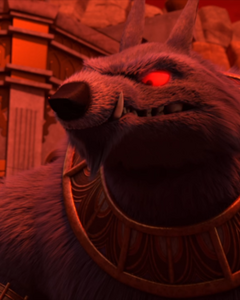 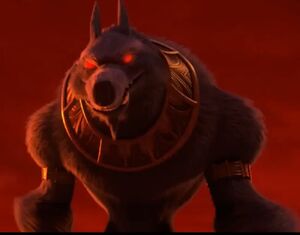 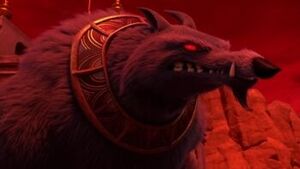 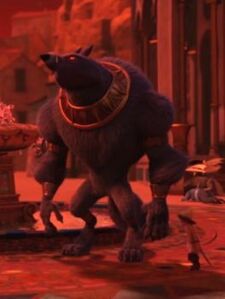 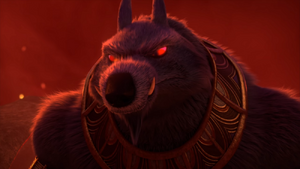 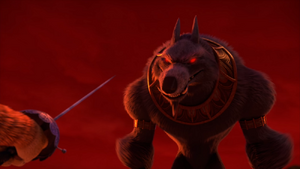 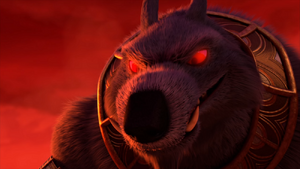 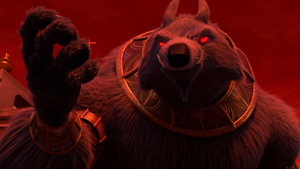 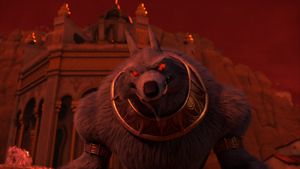 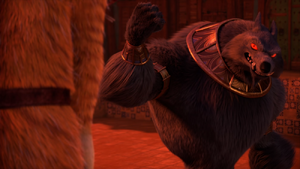 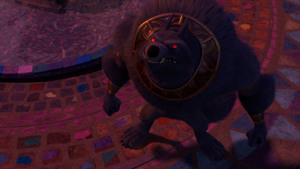 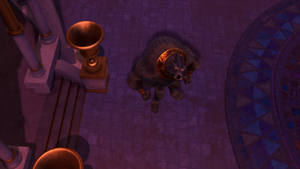 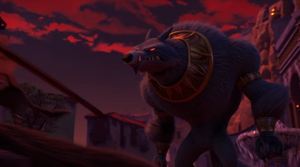 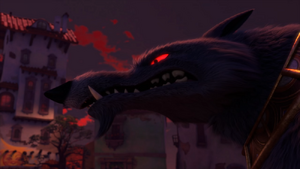 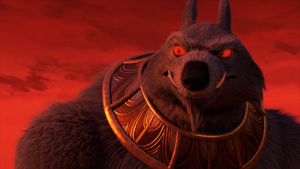 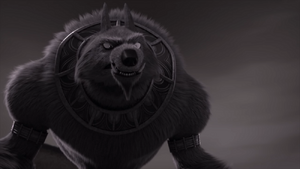