Member of Legion of Zoom

Kill everyone in Central City (failed).

Ramsey Rosso, also known as Bloodwork, is a minor enemy of Barry Allen, the second iteration of the DC Comics hero known as the Flash.

Ramsey Rosso was born a hemophiliac, meaning his blood did not clot properly. Ramsey's hemophilia forced him to live life carefully, as even the slightest of cuts could be fatal. Ramsey grew up to become a coroner for the Central City Police Department's forensic department, as he wanted to help people find justice as any good citizen would.

Eventually, Rosso became disillusioned with his lifestyle due to the death that surrounded him; deciding to do something about his hemophilia to ensure he lived a happy and healthy life. Rosso began stealing blood from the crime lab and experimenting on himself with it, some of which was blood used by Metahumans.

Soon enough, the CCPD began catching on to the missing blood, and launched an investigation on the thefts. Feeling as if he was backed into a corner, Ramsey burnt down the evidence room in attempt to cover his tracks.

During one of his experiments, Rosso was caught red-handed by the Flash. Fortunately for Ramsey however, his experiments had payed off with compound interest, as he had not only cured his hemophilia, but also gained the power to control and generate blood.

Ramsey then battled against the Flash, but was quickly defeated and sent to Iron Heights Penitentiary.

Ramsey's tampering with metahuman blood to cure his hemophilia had altered his genetic structure. He now has the ability to change, generate and alternate his own blood at an accelerated rate.

Ramsey Rosso appears as the main antagonist of the first half of Season 6 of the TV series The Flash. He is portrayed by Sendhil Ramamurthy. 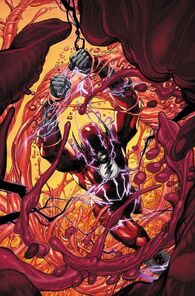 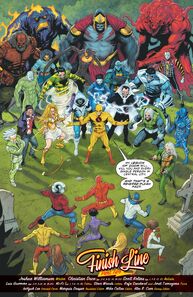