Abusing and blackmailing the new convicts.

Bloodwyn was a convict who was taken to the Mining Colony and he was one of those convicts who were truly criminals. King Rhobar's II 13 most powerful mages created a magical barrier so that no convict could escape. However, on an ancient archdemon, the power of Sleeper disturbed the balance of magic and the barrier became much larger. This distracted the king's people, who had been killed by a convict, Gomez with his minions. The convicts were then divided into three camps. The Old Camp, the New Camp, and the Sect Camp. Bloodwyn was Gomez's minion, so he became a guard in the Old Camp. He was the most hated guard next to Bullit. His favorite hobby was blackmailing convicts with Jackal. However, unlike Jackal, Bloodwyn did not accept a dismissive answer. Almost without a break, he reminded the convicts that they would not be harmed if they paid him. He pretended to be kind and good and only later showed his true personality. The nameless hero didn't like Bloodwyn too much after the guard was constantly blackmailed him. One day the hero refused to pay him. Then Bloodwyn showed him what he could do for a little money. Jesse, one of the miners warned the hero that Bloodwyn had paid other miners to attack anyone who did not pay him. One such miner was Herek, who believed Bloodwyn's defense money should be paid to him instead of the hero. Therefore, he attacked the hero, but he defended himself and defeated Herek. However, the greedy guard did not give up. He ordered other convcits, Grim and his two buddy, to trap the hero and beat him. However, the hero defended himself and the three convicts lost. The hero guessed that Bloodwyn was responsible for this, but it became certain when, before the fight, Grim himself confessed that the greedy guard had given them the order. However, Bloodwyn was one of the elite fighters in the Old Camp, so the hero did not attack him and he spared Grim's life. Of course, Bloodwyn continued to blackmail the hero even after the failed abuse, but the hero no longer paid him. The hero went through all three camps and became a well-known person in the Colony. After becoming a shadow in Old Camp, Bloodwyn tried to blackmail him even then. He was still stronger than the hero, but the hero did not pay him.

One day the Old Mine collapsed and the power of Gomez was endangered. To prevent his influence from weakening, he ordered Jackal and a group of guards to attack the Free Mine. The fire mages opposed this, so Gomez ordered the ore barons to kill the mages. After the murder, Gomez locked himself in his castle and called the nameless hero and Milten, the only survivor of the fire mages, a traitor. Bloodwyn and his men guarded the south gate of the Old Camp. One night, there was also the hero who was looking for his friend Diego. Bloodwyn attacked the hero with his men, who defended himself. However, the hero won, Bloodwyn was severely defeated and badly injured, and the rest of his men lay dead on the ground. Later, the hero returned to the Old Camp and punished the ore barons for their actions as well. Only Raven survived, with all other ore barons dying.

Gothic 2: Night of the Raven

Bloodwyn survived his defeat against the hero and became stronger. Raven made him his right hand. Raven led some of the convicts out of the Colony after the barrier was destroyed. They became the strongest group of the bandit’s of Khorinis. The bandits abducted many people from Khorinis territory. They made a deal with the pirates and they took Raven’s group to the ancient land of Jharkendar. A smaller group led by Dexter remained in Khorinis. The camp of Raven and the bandits was where the fortress of the Warrior Cast. There was a gold mine under the fort. Raven wasn't interested in gold at all, but Bloodwyn was finally able to live out his tremendous greed. The slaves constantly produced the gold for him. Many thought the gold was being mined for Raven, when in fact they were working for Bloodwyn. The bandits traded with the pirates, mostly buying food. But the bandits broke the agreement because of some of their insidious men (Franco, Esteban, Juan) and attacked the pirates. Raven's bandits were much more trained, the pirates defended themselves and built palisades in their hiding places.

In addition to gold, the slaves found something else. Raven found what he was looking for so much. The tomb of the High Priest Khardimon. However, stone guards erupted from the grave, killing many people but eventually the guardians were destroyed. Then Raven and Bloodwyn went in and Raven desecrated Khardimon's tomb with a spell and immediately went to the fortress. Only Bloodwyn could only go with him and they were both in the temple. However, when they both went into the temple, the nameless hero, who was thought to be dead, arrived. Because he wore bandit armor he was not attacked. His goal was to stop Raven. But only Bloodwyn could decide who went into the temple, but he was in a temple. The hero then, taking the advice of a guard Garaz, killed all the minecrawlers in the hitherto abandoned part of the mine. This huge part of the mine was full of plenty of gold. Bloodwyn immediately went to the mine through his huge greed, but he didn't know the anonymous hero would be waiting there.

He recognized the hero immediately. The hero successfully provoked, Bloodwyn became extremely tense and uppity. The hero and Bloodwyn fought again and eventually the greedy guard lost again. This time, however, the hero went for sure and cut off Bloodwyn's head.

Bloodwyn was an extremely brutish, arrogant, rude, condescending person. In the Colony, many people hated him. Perhaps what surpassed the behavior of his rare brutish was his never-ending greed and selfishness. He blackmailed almost every new convict to give him ore daily. Whoever did not pay threatened or persuaded other convicts to beat his enemy. Even the nameless hero hated Bloodwyn on their very first encounter.

In Gothic 2: Night of the Raven, Bloodwyn became incredibly arrogant, boastful and haughty. He was envious of everyone who was better or stronger than him. He loved to make himself huge and unbeatable. He tried to intimidate people into believing that no one could stand in his way. He also liked to insult his opponents or talk to them vulgarly. Bloodwyn was very hot-headed, violent and aggressive. He could be provoked very easily. He fought worse in anger.

Bloodwyn was a very strong and dangerous warrior in the world of Gothic. He had great and serious physical strength and he was already a great swordsman in the Old Camp. He became even stronger in Night of the Raven and also used the two-handed sword great. Due to his great physical strength, he was a tough, persistent opponent. 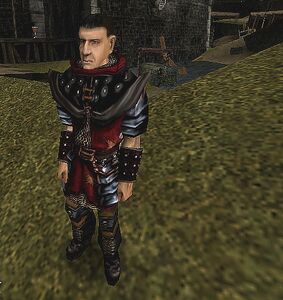 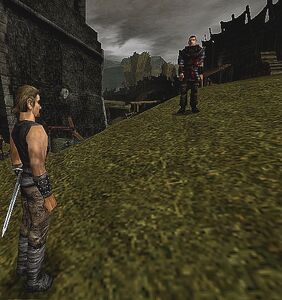 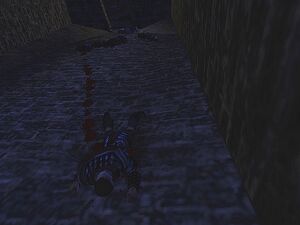 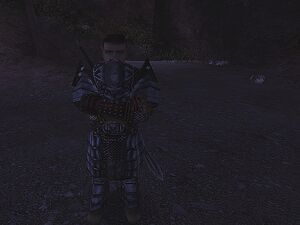 Bloodwyn in Gothic 2: Night of the Raven. 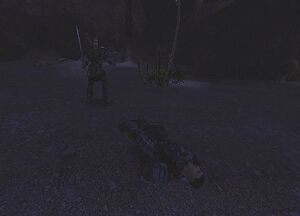