The Bloody Crow of Cainhurst is a minor antagonist in the 2015 videogame Bloodborne. He is an enemy hunter and is the last enemy to be faced as part of Eileen the Crow's questline.

The Bloody Crow of Cainhurst is a hunter who has presumably gone mad with bloodlust, killing other hunters who come in his way. As a result, the hunter known as Eileen the Crow targets the Bloody Crow as her last enemy to take out. However, in her old age, she proved to be no match for him in combat, as the player finds her in a pool of her own blood, barely alive on the steps leading up to the entrance of the Grand Cathedral.

Within the Grand Cathedral where the player previously fought Vicar Amelia is the Bloody Crow at Laurence's alter. Compared to the hunters that the player has fought before, the Bloody Crow may be the most formidable one yet, as he makes full usage of the Old Hunter Bone, allowing him to effortlessly dodge the player's attacks and retaliate. He also wields a Chikage that he makes full use of its transformed state and a Repeating Pistol that deals serious damage when it strikes the player. Should the player ultimately defeat the Bloody Crow, he drops the best version of the Blood Rapture Caryll Rune, which heals up to 300 health for every visceral attack. After the player kills the Bloody Crow, Eileen then rewards them with the Crow Hunter Badge and the Hunter rune. 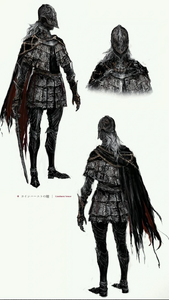 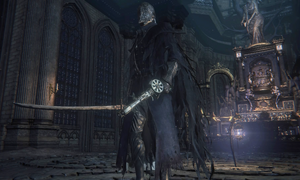 The Bloody Crow of Cainhurst. 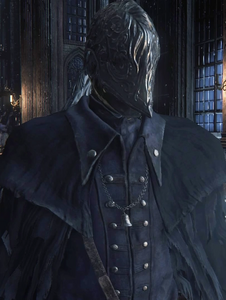 Closeup of the Bloody Crow.
Add a photo to this gallery

Retrieved from "https://villains.fandom.com/wiki/Bloody_Crow_of_Cainhurst?oldid=3533969"
Community content is available under CC-BY-SA unless otherwise noted.