Mary Worthington, known as Bloody Mary, is the main antagonist of the Supernatural episode of the same name.

Mary was 19, and lived by herself in Fort Wayne, Indiana. She had won a few local beauty contests and dreamed of getting out of Indiana, and becoming an actress. She was murdered on March 29 (year unspecified) when someone broke into her apartment and murdered her, cut out her eyes with a knife. Before she died, in front of a mirror, she tried to spell out her killer's name but only managed the letters T-R-E. A surgeon called Trevor Sampson was suspected but nothing was ever proved and her murder went unsolved. In revenge, Mary haunts the old mirror, killing people who hide secrets about unsolved deaths by burning out their eyeballs, unconcerned about the specific role her victims played in their own victims' deaths.

Mary targets both Jill, a woman who killed a young boy in a hit-and-run and covered it up, and Charlie, whose boyfriend committed suicide when she tried to leave him. After Sam lured her to him using his own guilt over not mentioning his dreams about Jessica's death to her, she was forced out of her mirror and destroyed by Dean when he showed her her own reflection in a mirror, causing her own power to kill people with secrets to destroy her. Dean then smashed the mirror. 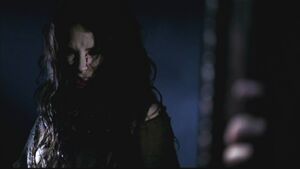