Find her one true love.

Bloody Mary is an unstable woman determined to find her true love and an anti-hero from Twisted Metal: Black.

She was voiced by Mary Fleming.

When Mary was a girl, she was always considered odd. Despite her mother's reassurances that she was just a “late bloomer,” she still felt like an outcast. Mary eventually had a crush on a boy in her school and spent months working up the courage to tell him how she felt. When she finally told him, pouring her heart and soul into it, the boy called her an ugly fat cow and pushed her into the mud. Mary was hurt and enraged, wanting to punish him, and she began growing increasingly unstable.

After college, as all her friends got married, Mary became more and more violently jealous of them, having crazed fits every time one of their weddings rolled around, until finally, she had to start taking meds to calm down. However on the day of her friend, Kristen's, wedding, Mary became enraged when she threw the bouquet to her, not helped by the fact that she'd gone off her meds that day. She grabbed the knife for the wedding cake and stabbed Kristen to death, dragging her body into one of the dressing rooms. After bolting the door and putting on Kristen's wedding dress, Mary looked at herself in the mirror, deciding she was the most beautiful bride she'd ever seen.

Afterwards, Mary was put in Blackfield Asylum, where she remained for some time until Calypso approached her. He told her about his Twisted Metal contest and that if she won, he'd find her the man of her dreams. Mary eagerly accepted and managed to win the contest, going to Calypso to claim her prize. He delivered, bringing out a handsome groom for her that he'd mentally operated on, much to Mary's delight. However, as he took her into his arms, he told her that he would never love her, much to Mary's shock. Enraged, Mary killed him, deciding he wasn't good enough for her, and set out to find her true love, knowing he had to be out there, even if she had to go through every single man one-by-one.

Bloody Mary is solely driven by her desire to fall in love and one day get married. This aforementioned mindset was the result of her father killing her mother and his standards for some weird reason and the rejection she suffered by a boy she liked has damaged her psychological welfare, to the point that she developed jealous fits of rage whenever hearing of her friends getting married (having to take meds to calm her down). Being in the Blackfield Asylum for 7 years has done nothing to diminish her desire to find her soulmate.

Bloody Mary's Twisted Metal: Lost profile states that she has lost all hold on reality and is not sure what she wants, she only does what comes natural to her (i.e. driving and killing).

Mary's vehicle is Spectre, a sports car that she'd stolen from one of her friends while at her wedding. The car is fast and maneuverable, though it suffers from low armor. Spectre is equipped with mounted guns and various other weapons. Its special weapon is the Ghost Missile, a homing missile that will relentlessly burrow through the ground and walls to take out its target.

Mary being rejected by her crush, marking the beginning of her descent into madness. 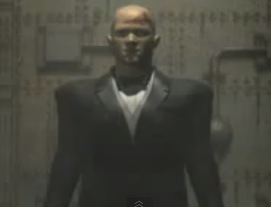 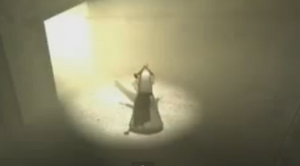 Mary killing her would be groom.