Scratching out her victims' eyes.

Be feared by people.

Bloody Mary, sometimes referred to as "Hell Mary", is a spirit in English folklore and an urban myth. This legend is one that has fascinated most young people for generations, though the exact origins of the legend or its associated customs are unknown, it was likely inspired by real-life English Queen Mary I of England, who was nicknamed "Bloody Mary", due to the hundreds of people she had burned at the stake during her rule from 1553 until her death in 1558.

According to legend, Bloody Mary is the ghost of an unhappy woman who either committed suicide due to having her baby stolen or was accused of murdering her children. Depending on the variation used, this turned her spirit mad with grief or anger and she would haunt the world via the use of mirrors.

Known in life as Mary Worth it is traditionally said that "Bloody Mary" will appear if a brave (or foolish) soul chants her name three or more times next to a mirror in complete darkness at midnight. According to the variations of the legend above one is also said to be able to make the ghost appear via stating "Bloody Mary, I killed your baby" or "I believe in Mary Worth".

Of course, anyone who is foolish enough to provoke Bloody Mary is said to pay the price, unlike many ghosts (who merely scare humans) Bloody Mary is said to be capable of physical harm and will either kill her victims via disfigurement, decapitation or by scratching their eyes out. If she is in a "merciful" mood Bloody Mary is said to simply turn her victim insane or (in rarer tales) she may take a fancy to someone and drag them into the mirror (presumably to the Other Side, like the ghosts in Poltergeist did).

Although the tales of Bloody Mary are dismissed as a modern fairytale of sorts by most people it is still a popular "game" among certain groups of people and may even be a rite of passage to some, a means of confronting one's fears or a way to play a mean prank on someone.

Main article: Bloody Mary (The Wolf Among Us)

Bloody Mary is the main antagonist of GrimTales 5 and is portrayed as an evil witch who cursed an entire school full of children into being trapped within a demonic Mirror World while shadow demons took their place in the living world and caused murderous mayhem on her behalf.

Bloody Mary is a vampire and the main antagonist of inFAMOUS 2 DLC, Festival of Blood.

When Mary was once a human, she became ill and was about to die. Just then, a vampire named Marco found her too beautiful to die and turned her into a vampire. Since then, the two went on a rampaging spree of killing and converting people into vampires.

Father Ignatius, the priest who is in Mary's deathbed, kills Marco, believing that she would turn human again. However, it didn't work and Mary swears revenge on him. She is killed by being burned to death by a pyre.

Years later, she is resurrected when her followers capture Cole MacGrath and use his blood for her corpse. 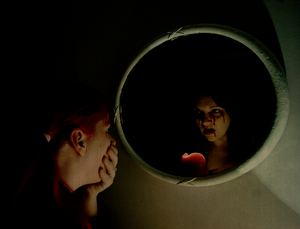