Head of the Imperial Knights (formerly)

Wipe out all demonkind of Elrios Continents.

Drink the blood of every demon alive to grow even more powerful.
Seek revenge on the demons for killing her knights (formerly).

Born as Elesis (Korean: 엘리시스) and later known as the Dark Knight, and Crimson Avenger, the fearsome Bloody Queen is one of the playable characters of Korean MMORPG game Elsword. She later becomes possible one of the main antagonists in-universe after her transformation into Bloody Queen, the strongest form of her 3rd Class in the Evil Path.

Elesis was Elsword's older sister and was a strong and calculating warrior who traveled the world to improve her swordsmanship. At 16, she had already traveled far to become a better swordfighter. She returns to Ruben to join her brother in training, only to part ways again after enduring a vicious attack from the demons on El world. With a mission to protect Elrios from an absolute demon invasion, Elesis takes on the road once more. This may be the best way to keep her brother and their homeland safe. While she does not know when Elesis eagerly looks forward to someday reuniting with her beloved brother. Elesis slowed slipped into darkness after she became an Imperial Knight in her Evil Path's 3rd Class and becomes the very monster she set out to destroy.

She was voiced by Yuh-Jin Yoon in the Korean version, Marina Inoue in the Japanese version, Erin Fitzgerald (Before 3rd Job) and is currently Reba Buhr (3rd Job Onwards) in the English version.

Elesis is a talented knight and older sister of Elsword. She can evade and gap close with extreme effect unlike her brother Elsword, who incorporates a more defensive fighting style. In addition to her swordplay with her 'Claymore', Elesis is capable of harnessing and expressing energy into the fire, enhancing her combat efficiency. She is also considered a collaboration character of Elsword and its predecessor Grand Chase. She was originally named Elsa in Elsword's background story.

Elesis is strong-willed but is prone to acting before talking. She would do anything as long as it's for her younger brother, Elsword, who she cares deeply for. Elesis' swordsmanship was taught by her father, a former Velder Kingdom Knight. She mastered her father's teachings quickly while integrating her unique style. Being unsatisfied with this training in Ruben, Elesis sought out to become a stronger swordsman, thus venturing out into the world of Elrios. After three years, she returned to Ruben bearing the title "Red-Haired Knight" and spent time training Elsword. However, the two siblings were ambushed by a horde of demons led by Scar, a Captain of the Demon Realm. Elesis, with the help of her brother Elsword, dispatched Scar and the demons. Elesis had predicted that demons would bring danger to the continent and, as a result, she leaves Ruben and joins the Velder Knights to stop the demon invasion to protect Elrios and her younger brother. Elesis is not a part of the El search party. Rather, she appears to help them in Velder as she is a Velder knight.

Elesis' feature is called Chivalry, a system a bit similar to Elsword, granted her to enter between two modes: Gale and Annihilation. In Gale mode, certain skills will have reduced mana cost and cooldown, making her capable of spamming skills in rapid succession, although with reduced damage. In Annihilation mode, certain commands and skills will have a 100% crit chance, granting extremely high damage while the Annihilation gauge lasts. Also, Mana Breaking while in Annihilation Mode causes her to Stoic Break instead, knocking all enemies back and granting her Super Armor for a few seconds.

Elesis is Elsword's older sister and a strong and calculating warrior who travels the world to improve her swordsmanship. At 16, she had already traveled far to become a better swordfighter. She returns to Ruben to join her brother in training, only to part ways again after enduring a vicious attack from the demons on El world. With a mission to protect Elrios from an absolute demon invasion, Elesis takes on the road once more. This may be the best way to keep her brother and their homeland safe. While she does not know when Elesis eagerly looks forward to someday reuniting with her beloved brother.

During a fierce battle, Elesis tried to stop Wally, the tyrannical dictator of the Elder region, from oppressing the people of Elder and exploiting the El, Wally's possession of Nasod power frustrated her efforts which caused her to reflect her ways and abandoned her righteous side to become a ruthless warrior. With Luichel's help, Elesis charged at Wally's troops, slaughtering most of the defenseless soldiers and enemies who had already surrendered. She now understands that the honorable way isn't always effective, and this time, she must turn to darkness to defeat the enemy.

Months later, she was ambushed during the battle against the demons that had conquered Feita, Elesis ended up losing all of the knights and friends under her command and was mortally injured in the process. Going back and forth between life and death, Elesis managed to cling onto life by absorbing the Dark Energy from a Dark El shard that she had confiscated from Amethyst, but due to the Dark Energy she absorbed she was reborn as the 'Crimson Avenger', who carried out bloody revenge against the demons.

With her defeat at Feita's battle, Elesis abandoned her post as the Scarlet Warrior and went on a journey to seek revenge. Though she killed and killed, burning with a vengeance for her fallen comrades, the dead did not come back and so she abandoned her desire for vengeance and became a complete genocidal cannibal warrior who thought in nothing but killing and causing chaos and destruction among the demonkind. As the bloodthirsty knight of death, she uses a forbidden technique that enhances her destructive power by consuming blood and so she slaughtered countless monsters and demons across Elrios, taking bath (and drinking) the blood of her victims to grow stronger. 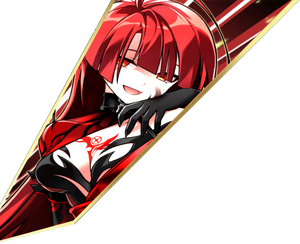 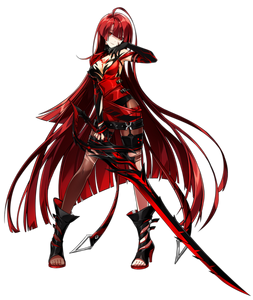 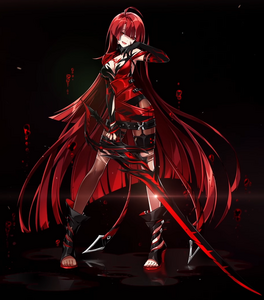 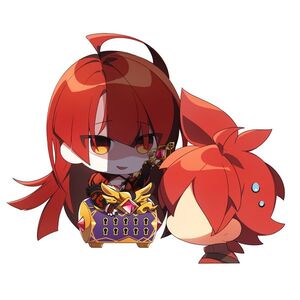 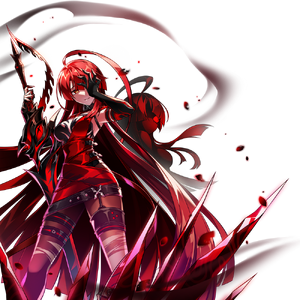 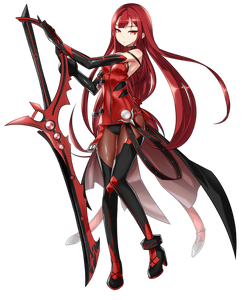 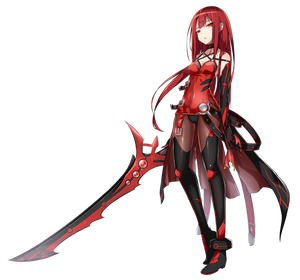 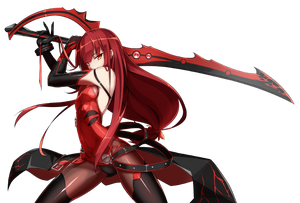 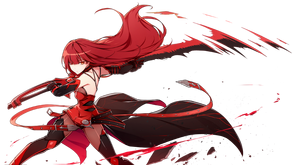 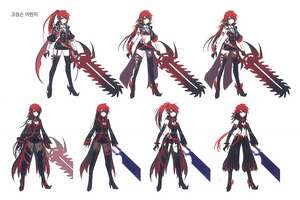 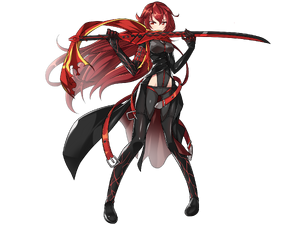 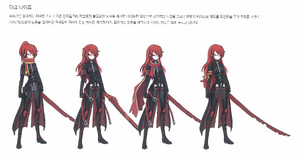 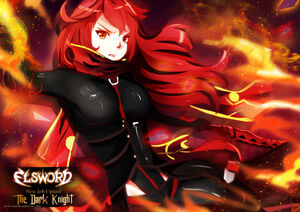 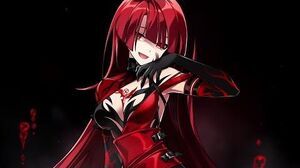 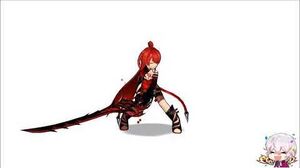 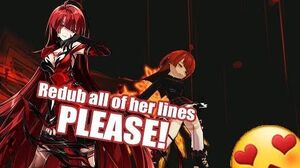