Take over the Land of Ooo (Partially succeeded; player dependent).

Bloons are a hostile species resembling balloons, which serve as the main antagonists in every installment of the Bloons Tower Defense (or Bloons TD) game series. They are bent on completely annihilating any and every territory they set their sights on.

Ever since the first Bloons TD game, the Bloons have aspired to do one thing: take over the Monkey Kingdom using sheer numbers (with the exception of Bloons Adventure Time TD, in which the Bloons attempt to invade the Land of Ooo instead). Their origins and motives remain a mystery, though it's likely that the Bloons may want the monkeys' land for the purpose of using its resources to create more of themselves. In the effort to seize the Monkey Kingdom from its rightful owners, the Bloons pose two main threats, the first of which is their ability to rush their opponents with large groups, allowing them to easily overwhelm an underprepared defense force in time. The second threat the Bloons pose is their technological prowess; with each new entry in the Bloons TD series, the Bloons are seen introducing new, more advanced units to their ever-expanding army, each one imbued with special properties that provide protection against the monkey defenders in some form or another. Despite these traits, however, the Bloons are not an intelligent species. Their seemingly infinite capacity for improving their units is compromised by the fact that they are terrible strategists. The Bloons rarely if ever deviate from their usual tactic of rushing the monkeys in organized waves, starting with their weakest grunts and slowly working their way up. This, coupled with the fact that the monkeys are also able to upgrade their own defenses, results in the Bloons constantly losing out to their furry rivals so long as the monkeys are adequately prepared.

These are the standard Bloon units. They come in many varieties, each with its own special properties.

These are the Bloons' secret weapons. They are massive blimp-like monstrosities that take numerous hits to be destroyed, are immune or resistant to many types of attacks, and carry so many smaller Bloons inside of them that just one escaping will instantly end the game.

In addition to engineering Bloon types that can resist certain types of attacks from the monkeys, the Bloons can also further enhance themselves with Bloon Properties that grant them additional powers which make them even harder to pop. Most of them can't be applied to MOAB-Class Bloons, though. 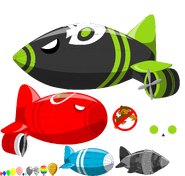