Blossomon is a minor villain in most of the Digimon series, mainly, Digimon Adventure 01, 02, Digimon Data Squad and Digimon Xros Wars, and the video game, Digimon World 4.

Blossomon is an Ultimate Level Digimon that resembles a giant plant-like monster with tentacles. Most of them have purple petals, but in Digimon Xros Wars, there is a Blossomon with pink Petals. He is an Ultimate-leveled Plant type Digimon who took on the form of a huge flower, with many tentacles growing out of her body. Despite her strange outer looks, she has a very obedient nature, but isn't the one to appear amongst others constantly. The petals that exist around her body (her face?) bears a changeable characteristic in that as the seasons change, they fall off, but new petals grow back: this unusual yearly occurrence mean she leads a long life, longer than other plants. She dislikes arid areas, and constantly prefers to live near estuaries. Her special attack is "Spiral Flower", which fires the small flowers often found on the tips of her tentacles like shurikens. The petals around these flowers can tear through very hard surfaces.

Blossomon appeared as a boss Digimon in the Death Valley in Humid Cave. She also reappeared in Abyss of Grief.

Blossomon were members of the Bagra Army. They served one of the Death Generals; Zamielmon.

The Young Hunters Who Leapt Through Time

Afterwards, a pink version of Blossomon appeared in the DigiQuartz, where she kidnapped and attached herself to Miho Sudou, who got jealous of her classmate's higer grades. After Arresterdramon rescued Miho Sudou, Blossomon was defeated by OmegaShoutmon and captured by Tagiru. 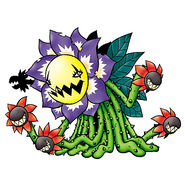 Retrieved from "https://villains.fandom.com/wiki/Blossomon?oldid=2990446"
Community content is available under CC-BY-SA unless otherwise noted.