Members of the Decepticons

Pyrokinesis
MarksmanshipAbility to combine with other Terrorcons to form Abominus

Robotic Minion
Blot is a minor antagonist in the Transformers franchise, especially Generation One. The original version of the character was a member of the Terrorcons, a group of the Decepticons.

Blot made his first appearance in the late third season episode "Grimlock's New Brain", where he and the other Terrorcons assisted Galvatron in his scheme to raid Unicron's head for anti-electrons. They were initially successful but were beaten back by the arrival of the new Technobots. Blot and the others were given a featured role in "Money is Everything", employed by the Quintessons to recover a matter disassembler/reassembler which had been stolen by Dirk Morgan, which saw them again go up against the Technobots.

Blot was among the raiding party on Gregory Swofford's laboratory in "The Return of Optimus Prime". He was last seen in the concluding three-part miniseries "The Rebirth" as part of Galvatron's assault team against the Autobots on Cybertron.

He was voiced by the late Tony St James, who also voiced Brawl.

He appeared in the regular comic during the Underbase Saga, by which point Scorponok's faction had traveled to Earth and ended up clashing with the locals Decepticons led by Ratbat. Blot was among the Transformers deactivated by the Underbase-powered Starscream.

The post-movie version of the character appeared in "Headhunt" where he was sent by Shockwave to make contact with the bounty hunter Death's Head. His attempt to convince Death's Head to go after Rodimus Prime out of pride fell on deaf ears, but offering him money was more successful. In "Time Wars", Blot and the other Terrorcons acted as Soundwave's back-up when he set up an energy-draining machine on Earth, only to have it wrecked by Kup, Arcee and Red Alert. They pursued the Autobots into the past and ended up becoming part of an alliance against Galvatron. However, they ended up fleeing the battle without engaging and returning to their own time.

Blot from his Transformers Universe profile.

Blot and the other Terrorcons from the cartoon.

Blot and other Terrorcons in beast mode. 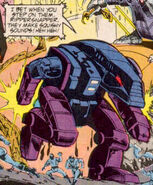 Blot in the Headmasters miniseries.

Blot with Cutthroat in Time Wars.
Add a photo to this gallery

Retrieved from "https://villains.fandom.com/wiki/Blot?oldid=3986601"
Community content is available under CC-BY-SA unless otherwise noted.