Elemental Wizard
Blowhard is an antagonist from Spyro the Dragon. This weather wizard is employed as the boss of the Magic Crafters homeworld by Gnasty Gnorc and is tasked with defeating Spyro. He is the third of six bosses fought in the game.

Blowhard is a strange, floating set of arms, shoulders, eyes, a nose, and an orange beard, without much of a face connecting them. He sports a pointy brown wizard hat, and his lower body is composed entirely of a tornado of wind.

Blowhard is the boss of the self-titled level "Blowhard" in the Magic Crafters world. Like Toasty and Doctor Shemp before him, Blowhard is defeated by three flame attacks from Spyro.

Blowhard, however, is chased throughout the entirety of the level, rather than being confined to an arena like his predecessors.

Blowhard attacks by summoning clouds which release lightning bolts. Despite his magical abilities, he is easily dispatched and will release gems upon the third successful flame attack. 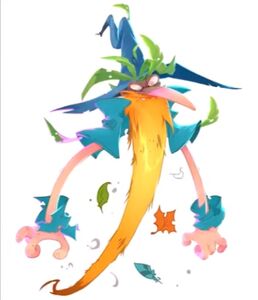 Retrieved from "https://villains.fandom.com/wiki/Blowhard?oldid=3941078"
Community content is available under CC-BY-SA unless otherwise noted.