Villains Wiki
Register
Don't have an account?
Sign In
Advertisement
in: Corrupt Officials, Lawful Neutral, The Simpsons Villains,
and 22 more

Defend his clients whether they are good or evil

Corrupt Lawyer
The Blue-Haired Lawyer is a recurring antagonist of the TV Series The Simpsons. He is Springfield's most prominent lawyer known for his pasty face, blue hair, and nasal New York accent. He is one of Mr. Burns' lawyers.

Many times, he has shown up when the Simpsons are in court (usually on the opponent's side) and quite often makes good points and wins over the judge. Outside of Springfield Court, he always gives out lawsuits and controversies to everybody in Springfield, especially in the Family Guy/Simpsons crossover special, "The Simpson Guy", he is not very happy about meeting the Griffin family who are in Springfield using cutaway gags and arguing which is the greatest alcoholic beverage in America whether it is Duff beer or Pawtucket Patriot.

In one notable appearance, he tries to issue a cease and desist order to Principle Skinner for calling his school carnival "the Happiest Place on Earth", noting that it is a registered Disney copyright. Unfortunately for him and his two henchman, Skinner is a former Green Beret, who wipes the floor with them.

At one point, the Lawyer interrupts Lisa Simpson when she is about to retell Snow White and the Seven Dwarves and he protests that under no circumstances should she tell this story, as it violates Walt Disney's rights. However, Lisa protests that the original story is much older, and that "no one owns that." When the Lawyer asks if she has any original characters in her story, Lisa invents them off the top of her head - they are just the same Seven Dwarves, but with different names and modeled on Springfield residents.

He is one of Mr. Burns' lawyers. Many times, he has shown up when the Simpsons are in court (usually on the opponent's side) and quite often makes good points and wins over the judge. However, he has attempted to aid the Simpson family at least once.

He also occasionally appears to serve as a prosecutor. He worked for "Luvum & Burnham: Family Law" in one episode, where he had a secretary named Uwa (homophone for "YOU WHA?!?!"). 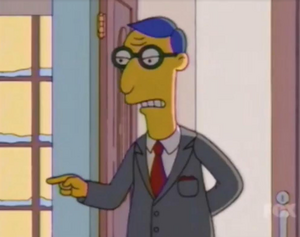 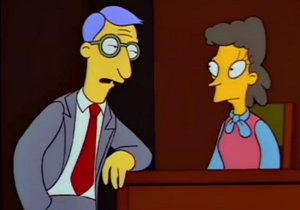 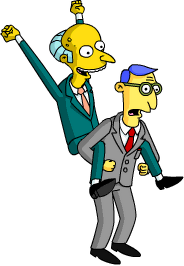 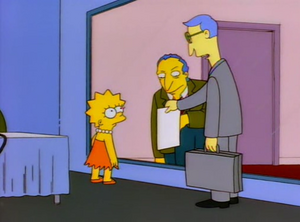 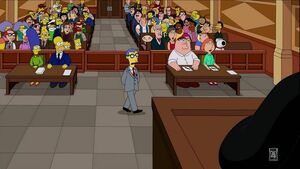 The Blue-Haired Lawyer is not very happy about meeting the Griffin family in Springfield.