Leader of the Aichi Mountain Trio

Forcing his puppy slaves to steal food from humans

Blue is one of the minor villains of Ginga Densetsu Weed, appearing in the Monster Arc. He is a dog who lives in some mountains near a city with his two minions, Ned and Bell. He is a possible accomplice of one of Hougen 's minions, Nero .

He is voiced by Shunsuke Sakuya.

Blue is a beauceron with shorthair fur, a deep-blue back and cream-white underside. He has a scar on his left eye, although its origins are not known.

Blue is a cunning and manipulative dog, who takes in orphaned or abandoned puppies and acts as a parental figure to them, including palying with them and teaching them skills. However, as the puppies grow loyal to him, Blue starts to use them like slaves, forcing them to steal food from humans for him and his gang to eat, praising and encouraging the puppies after each theft. If any of his puppy slaves refuses his commands, he first tries to guilt trip him by reminding him of his past with him. If the blame doesn't work, he threatens and then kills him.

It is stated that Blue acts this way due to not receiving any love himself. The only time he showed genuine kindness was at the verge of death, saving Weed from an oncoming truck and sacrificing himself after seeing Weed coming to save him despite his villainous deeds.

Blue was born in the Nara Prefecture of Japan, although he later moved to the Mikawa Province of the Aichi Prefecture, living in the Aichi Mountains with his companions Ned and Bell. He was once the adoptive father of the abandoned Labrador retriever puppies, Hook and Kuro. He raised them as a seemingly-caring father, sometimes even playing with them. However, as they turned a little older, he began sending them to steal food from humans. Kuro once stood up to him and after Blue's attempts at guilt tripping and threatening didn't work, he and Ned killed Kuro while Hook managed to escape.

A few years later, Blue adopts a golden retriever puppy named Mel and uses him like a slave. After Mel meekly refuses to continue the theft of human food after an encounter with an angry man, Blue uses violence on him and threatens him, but Weed arrives along with GB, Smith and Hook, who wants to avenge his brother. GB threatens Blue by telling him that they are from the Ohu Army, but Blue accuses him of lying, stating that the Ohu Army was wiped out by the humans. However, GB points out that Weed is the son of the Ohu leader and Blue, while acknowledging the similarities between Weed and his father, denies any authority of the Ohu Army over his land and commands Mel to kill Weed. While Mel does attack Weed, Weed provides Mel courage and Mel turns on Blue and attacks him, causing Blue to attack the group. A brief scuffle ensues and after Ned and Bell are defeated, Blue swiftly escapes by jumping over a fence.

Blue laughs at the face of the group before telling them that he needs to meet up with Nero. However, as he is crossing the road, he is hit by an oncoming truck and falls on the road, unable to get up. Hook is joyous at his downfall, but Weed jumps over the fence and tries to help Blue despite his past actions. Blue, seeing the proportion of Weed's kindness saves the pup from another oncoming truck, getting run over himself instead.

Blue dies from his injuries and before his death, he states that he wishes he could have met someone like Weed earlier in his life. Blue is presumably given a funeral by the group. 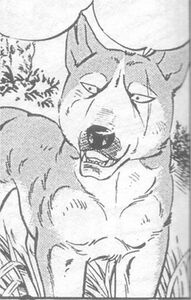 Blue in the manga 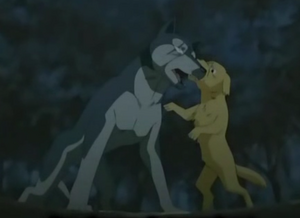 Blue being attacked by a rebellious Mel 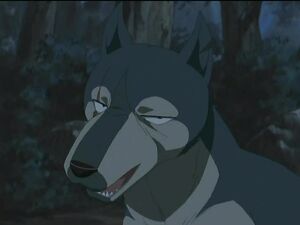 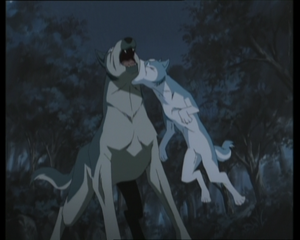 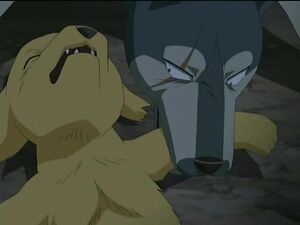 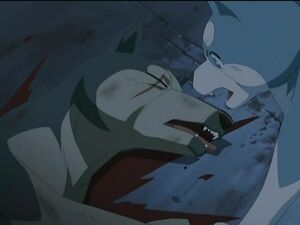 Blue after being run over by the second truck 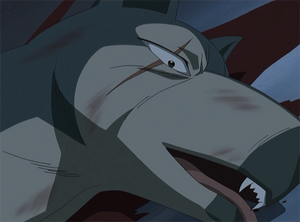 Blue just before his death
Add a photo to this gallery

Retrieved from "https://villains.fandom.com/wiki/Blue_(Ginga_Densetsu_Weed)?oldid=3790575"
Community content is available under CC-BY-SA unless otherwise noted.