Sophisticated means of media communication to manipulate and brainwash humans

Deceiving/exploiting humans through propaganda and surveillance

The Blue Aliens are the eponymous main antagonists of the 1988 John Carpenter sci-fi film They Live.

These beings came from outer space and want to control the wealth and political powers of Earth. They were able to take over by using a giant satellite dish that will make the blue aliens look just like ordinary people to regular humans. They also have the power to teleport using a device on their arms, and the device also works as a communicator.

The blue aliens want money, political power and sexual intercourse. Their primary method of obtaining all three are advertisements that also deceive humans due to the giant satellite dish. These advertisements seem very bland and non-surprising with all its pictures and images as there are only a few words or even no words at all. That's how the advertisements were convincing to the humans. One example is that when Nada first experimented with his sunglasses, he saw that a billboard showing a girl in a bikini that has the caption "Come to the Caribbean" actually reads "MARRY AND REPRODUCE" with glasses on. This proves that the billboard wasn't really about the Caribbean, it was just about the bikini girl and her body was being used to get people hyped up for sex.

The aliens use propaganda disguised as advertisements depicting money, power, and sex to control humans.

Then there are humans who work for Blue Aliens. How did they come into contact with the aliens is unknown, but they work for the aliens' benefits. The Drifter, one of the human collaborators states that by aiding the aliens, the humans are given to the kind of life that they could only dream of having. However, it is indeed known that humans are nothing more than physical or sexual slaves to aliens and the Drifter only sided with the aliens, because he grew fed up with being a homeless bum in his entire life, and by turning on his own race the aliens privileged him with a life of luxury. Among the most successful collaborator is a woman named Holly Thompson: by aiding the aliens she is given an assistant director of Cable 54 Station (the source of Alien's brainwashing satellite dish), hefty salaries and luxurious home.

Not much is known of the origin and background of the blue aliens, not even when they landed on Earth and began overthrowing the human race. It is implied that the aliens even overthrew other extraterrestrial life from different worlds across the galaxy to find as many planets rich in resources.

The film's main protagonist, Nada found a pair of sunglasses that exposes the aliens' true faces and after yelling out loud in a grocery store full of aliens that he knows their secret. He then killed the police officers who were aliens, then took their guns and started killing several of the aliens in a bank declaring, "I have come here to chew bubblegum and kick ass. And I'm all out of bubble gum." 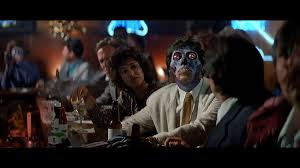 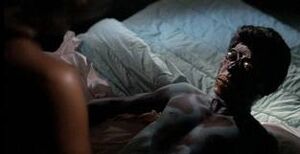 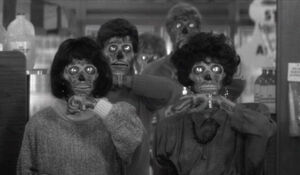 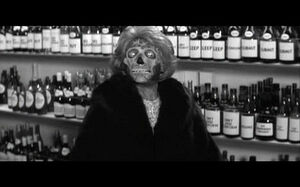 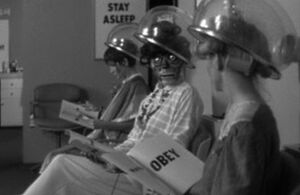 Retrieved from "https://villains.fandom.com/wiki/Blue_Aliens?oldid=3856055"
Community content is available under CC-BY-SA unless otherwise noted.