Destroying bonds between their owners and owners' kinsmen

Bring their human owners to their king for food.

Command his flocks to bring humans for food.

The Blue Birds are the main antagonists of Stomae's music video for the song Carmen.

The video starts off with a little blue bird flying towards Paul's window. The bird landed on Paul's shoulder. Once Paul saw the bird, he started taking pictures with it, as they both grown up together. After Paul became an adult, his parents told him to be careful, while the bird was eating and Paul was on his telephone.

After Paul moved out with his bird, in front of them, his younger sister on her scooter went in front of them. Paul waved at her, as she waved back, but the bird made a scary face, which made her afraid. After that, Paul went with his bird we're in a restaurant, at a party and in a theater-whole time taken pictures and posting them on Twitter, while the bird was eating food.

Next day, Paul and the bird were sitting on a bench, as a girl sits next to Paul. The two fell in love and went to her house to have love, but the two got into an argument, as the girl slapped him. Paul and his bird moved out. As the bird bit Paul by his shirt and placed him on its back.

Apparently, the birds would bring their bosses to a huge King Blue Bird that would eat them. At some point, Paul's girl came back for him, she tried to hold his hand, but she fell down on the ground, as another bird stomped on her, killing her. The bird then drops Paul inside of King's mouth. In the end, the same bird went to its next victim, and that's Paul's younger sister. 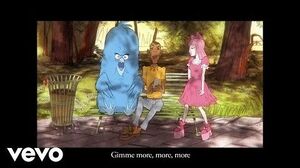 Stromae - carmen
Add a photo to this gallery

Retrieved from "https://villains.fandom.com/wiki/Blue_Birds?oldid=3700969"
Community content is available under CC-BY-SA unless otherwise noted.