Blue Pearl (in the credits)

She is voiced by Deedee Magno-Hall, who also voices the Crystal Gems' Pearl and Yellow Diamond's Pearl.

Physically, she appears almost identical to the Crystal Gems' Pearl and Yellow Pearl, as she also possesses a thin, tall build, a pointed nose, and pixie haircut. She has sky blue skin and chin-length, messy, periwinkle hair. In the fashion of her owner, Blue Diamond, the upper portion of her face is covered by her bangs. While it is not shown in the actual series, she has at least one eye, as seen in a drawing by Joe Johnston. Her outfit consists of a periwinkle bodysuit with an open diamond-shaped keyhole neckline, similar to Yellow Pearl's, a knee-length, frost blue, sheer skirt, and pale blue flats. Her gemstone, a powder-blue pearl, is on her chest and is a round polished cabochon.

Blue Pearl is a shy Gem, performing her duties without speaking. The only instances where Blue Pearl speaks is when Blue Diamond talks to her first. Blue Pearl is also seen to be easily frightened because when Greg pops out of the bushes before her, she gasps and has a fearful expression on her face. Blue Pearl is shown to not have a problem taking on requests by Blue Diamond.

That Will Be All

Blue Pearl acts as the court illustrator at "Rose Quartz's" trial, crafting illustrations of the proceedings and reconstructions of Pink Diamond's shattering as told by Steven. During the proceedings, she is briefly affected by Blue Diamond's pathokinesis wave, and later is shocked by the defending Zircon's allegations, particularly in the question regarding Pink Diamond's Pearl.

In a flashback, Blue Pearl is seen standing next to Pearl as their respective Diamonds discuss Earth.

Blue Pearl escorts Steven and Pearl to Blue Diamond. While Steven is seeing Blue Diamond, Blue Pearl says to Pearl, "Welcome back." She later reminds her Diamond of an upcoming appointment.

Blue and Yellow Pearl help Steven plan his ball. When Steven asks them about things they enjoy doing, Blue Pearl quietly says that she likes to draw. She shows some of her drawings to the Crystal Gems and Yellow Pearl, who asks her to draw her from another angle. They are then interrupted by the arrival of Blue Diamond, who they leave with. At the ball, Blue Pearl announces the arrival of her Diamond.

For millennia, Blue Pearl has been traveling around with Blue Diamond. She respects her Diamond, constantly bowing in her presence and saluting her. Blue Pearl follows every command Blue Diamond gives her (though not as enthusiastically as Yellow Pearl), and doesn't appear to have any issue with that.

The bulk of their relationship has not been explored. However, it may be a negative one. In "That Will Be All," when Yellow Pearl stands next to her, she grimaced at Blue Pearl with pride. Afterward, when ordered by Yellow Diamond, they sang together but only after Yellow Pearl implored her to join in.

They are seen standing together in a flashback in "Now We're Only Falling Apart". Also, in "The Trial", when the defending Zircon mentioned Pearl, both Blue and Yellow Pearl appear shocked. In "Familiar" she is seen standing next to Pearl saying "welcome back," in a show of friendly recognition of her return.

Blue Pearl views Steven as Pink Diamond, and as such treats him as a Diamond. 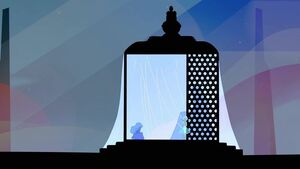 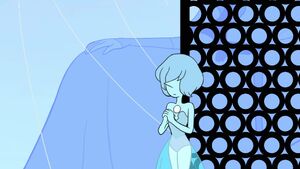 Blue Diamond's Pearl in "The Answer". 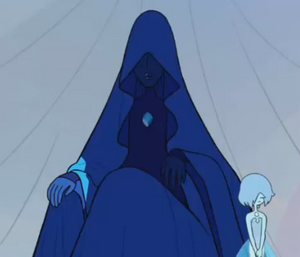 Blue Diamond's Pearl with her Diamond.
Add a photo to this gallery

"My Diamond, I’ve found a native." 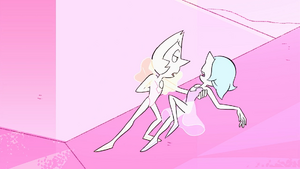 Blue Pearl with Yellow Pearl in the song "What's the use of feeling, Blue?" 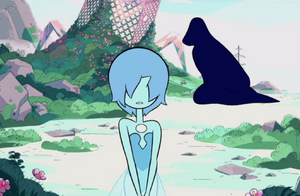 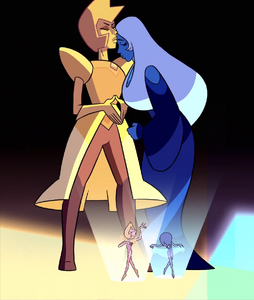 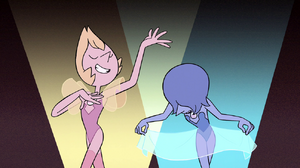 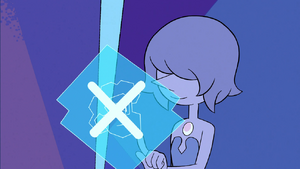 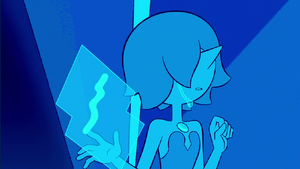 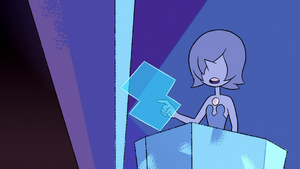 Welcome back
Add a photo to this gallery 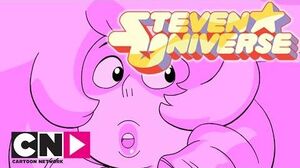 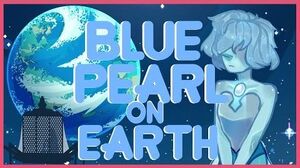 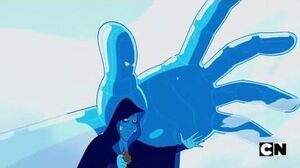 Retrieved from "https://villains.fandom.com/wiki/Blue_Diamond%27s_Pearl?oldid=4258342"
Community content is available under CC-BY-SA unless otherwise noted.