Kill the Bishop of Gresit (succeeded).

Kill Trevor Belmont and the rest of humanity (failed).

Blue Fangs is a minor antagonist in the Netflix original animated series Castlevania. He is a demon in service to the dark lord Dracula, named after the blue color of his serrated teeth.

He was voiced by Fred Tatasciore, who voiced Kakuzu in Naruto.

Blue Fangs appeared in the fourth episode and Season 1 finale "Monument", first appearing in the beginning when he and several other demons entered the church where the Bishop of Gresit worked. He mocked the Bishop for the latter's arrogance about his claims to be carrying out the work of God, calling him out on how his work disgusted him so much that he turned his back on him.

The Bishop snapped at him claiming that the attacks of Dracula's hordes were the fault of his wife Lisa and the Speakers, even going so far as to claim that Lisa was a witch. Blue Fangs was amused by the latter's claims, pointing them out as lies in his church and the reason why God has abandoned him, and voiced his love for him before proceeding to eat him alive.

Blue Fangs was later seen during Trevor Belmont's fight against the hordes in Gresit where he inspired the villagers to follow him in fighting back against Dracula's minions and retaliating against the priests of Gresit for having manipulated them all along. The former was slain by Trevor, bragging that there is an army of the hordes from hell beforehand.

Blue Fangs is a powerful demon that is quite intelligent despite his monstrous appearance, possessing a strong vocabulary and a good understanding of morality, seemingly understanding his own evil nature and hating hypocrisy, as shown in the pleasure he took in directing his breaking speech towards the Bishop of Gresit and his false self-righteousness before proceeding to devour him. However, his fighting style is animalistic, as he delights in tearing humans to pieces with his serrated teeth and claws. 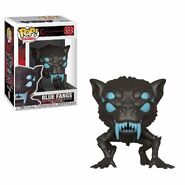 Blue Fang’s Funko Pop
Add a photo to this gallery

Retrieved from "https://villains.fandom.com/wiki/Blue_Fangs?oldid=4074325"
Community content is available under CC-BY-SA unless otherwise noted.