Prevent Ariadne from finding out his dark secret (failed).

Kill anyone who discovers his secret (succeeded until defeat).

Bluebeard (French: Barbe bleue) is the titular main antagonist of the fairy tale of the same name. He is notable for being one of the darker and more realistic fairy tale villains, and he is depicted as either a wealthy lord (who is secretly a serial-killer) or an ogre, depending on the tale. Though the latter may merely be a figure of speech referring to his brutality.

Bluebeard was a wealthy man who was named after his large and strange beard, which was an eerie blue color. He was married many times but never seemed to keep a wife. This made him unpopular with many girls, who often refused his offers of marriage. However, he managed to wed a young woman, but shortly afterwards had to leave the country. He entrusted his new wife with the keys to his home but forbade her from ever entering one particular room, locked with a golden key. Bluebeard's new wife grew ever more curious about what lay in this forbidden room and eventually managed to sneak a peek into the room, to her horror she discovered the room covered wall-to-wall in clotted blood, with the corpses of his many former wives hanging upon the walls (some versions say the room contains only the severed heads of his former wives).

Terrified, she locked the door again and pretends she never went anywhere near the horrible secret room. However, when Bluebeard returns home he discovers proof that she disobeyed him- in some versions she gets a bit of blood on her shoes or the key, or he finds the key on the floor by the door after she dropped it in fright. Bluebeard then flies into a rage and threatens to behead her on the spot, yet relented when she begged him to have time to say her final prayers.

He allowed her to confine herself to a tall tower to await her fate. However, when Bluebeard, sword in hand, began to chop down the door to kill his wife, her brothers arrived on the scene. Bluebeard attempted to flee, but was captured and killed. Bluebeard's wealth was left to his wife, who spent it on improving the lives of her sister, brothers and finally herself, marrying a gentleman who soon helped her forget her mistreatment at the hands of Bluebeard.

The story of Bluebeard is often framed as a warning against the dangers of curiosity and why sometimes it is best not to know everything. It can also be interpreted as showing the importance of trusting one's gut instincts if something seems terribly wrong,

The word "Bluebeard" is often used to describe husbands who kill their spouses, or a male serial killer who lures women to their death with his charm and money.

Real life serial killer Henri Désiré Landru has been nicknamed "The Bluebeard of Gambais" after having a similar modus operandi. 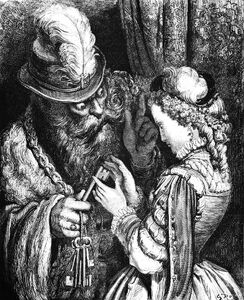 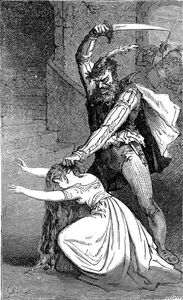 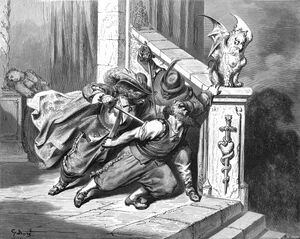 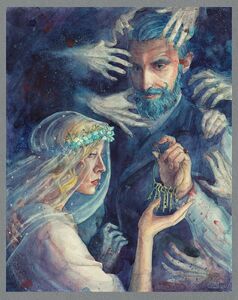