Blueno is an antagonist in the One Piece series. He was the bartender of a bar in Water 7 before he was revealed to be an assassin of CP9. After the events of the Enies Lobby arc, Blueno has become a fugitive from the World Government along with the other members of CP9.

He was voiced by Seiji Sasaki in the Japanese version of the anime, and Mark Fickert in the English version.

Blueno is a tall man with big lips, a black beard and black hair in which his hairstyle resemble the horns of a bull. During his time as a bartender, he wore a yellow shirt with purple polka dots and a white apron over it. As a CP9 member, he wore a black one-piece clothing. During his contact with Robin in Water 7 and the attempts to assassinate Iceburg, he wore a checkered pattern cloak with necklaces of beads. Accompanying this costume, he wore two masks. First he wore a female mask, then a bear mask after the former was left in the Galley-La Company.

While the entire Water 7 CP9 unit gave the initial expression of emotionless and justice-devoted killing machines, Blueno is the only one to maintain such a facade; while the others (Kaku, Lucci, Kalifa, Jabra, Fukuro, and Kumadori) are shown taking pleasure in fighting, toying with their opponents, and so on, Blueno remains calm and collected nearly all the time, implying that this is his natural personality. As a result, Blueno comes to symbolize the cynica; and evil actions of the World Government - namely using Nico Robin, by blackmailing her through traumas inflicted by the World Government in the first place. Like the others, he is greatly shocked when a pirate managed to fight on par and even overwhelm him. He has great faith in his own powers and his Rokushiki ability. He also disbelieves in things that are not proven to him, as demonstrated when Jabra was scared of other devil fruits due to the myth about devils inside devil fruits.

Blueno's Tekkai seems to be the one of the more powerful of the group, and he was the first to reveal any variations of the move. While not a master at the level of Jabra, Blueno understands the physics of Tekkai well enough to develop variants such as "Wheel" that allow him mobility in conjunction with Tekkai. In addition, he displays a level of tactical prowess, taking his time to determine how to minimize Luffy's increased speed.

However, despite this advantage, Luffy was able to use his new Gear Second abilities to defeat him when they fought in Enies Lobby. Lucci stated that Blueno's bartender job has dulled his senses, but it might just be another show of the arrogance of most of the CP9 unit. Nevertheless, with Luffy only having recently developed his Gear Second mode around the time when he used it against Blueno for the first time in combat, Blueno has been made memorable as the first adversary to receive the honor of witnessing Gear Second's first activation, as well as the first to be subsequently felled by Luffy while in this state. Bearing a Doriki of 820, Blueno was no run-of-the-mill fighter, only weaker than the top three members, Jabra, Kaku, and Rob Lucci.

Blueno ate the Door-Door Fruit, a Paramecia-class Devil Fruit which allows him to create doors on any surface. He has even created "air doors", doors in the air itself, which lead to what seems to be another dimension, allowing him to travel great distances and enter a safe haven where his opponents cannot reach. Blueno is also able to create doors on people, and did so to Luffy's face, causing it to spin like a revolving door. In battle, Blueno also uses his door to move freely through the entire environment, setting himself up for sneak attacks, and even creating small doors wherein he traps his opponents' feet.

22 years before the start of the series, an 8-year-old Blueno (alongside a 13-year-old Jabra and a six-year old Rob Lucci) was seen training to master the Rokushiki style and in assassination with the other CP9 hopefuls on their homeland when Gol D. Roger was executed. They trained hard in order to be "stronger than justice".

When Blueno was first shown, he is seen as a bartender in Water 7 and seems to be the most friendly with Franky and Paulie, talking with them about life and their current activities. He had a friendly talk with Franky and Kokoro about the mystery if CP9 is real or not from what Kokoro had heard of, unaware that Blueno is a member himself.

He soon shows his true nature when he (along with the rest of CP9) attacks Paulie and Icburg for the Pluton blueprints. He is the agent that Robin ran into on the streets in Water 7 while she was with Chopper, as well as the agent whose Devil Fruit powers were used in both attempted assassinations of Iceburg. He engages battle with the Straw Hats and easily by showing off the powers of his Rokushiki abilities. They leave after setting the building on fire, framing the Straw Hats for it and leaving Iceburg and Paulie in the fire.

He was also present when the rest of CP9 captured Franky, though it should be noted that he could not defeat Franky and he needed Lucci's help to subdue him.

His power was also vital in thwarting Sanji, Franky, and Sogeking's attempt to rescue Nico Robin on the Sea Train. Sanji tries to kick him away with his strongest kicks, and Blueno only slightly flinches from the force causing Lucci to claim that his time as a bartender has weakened his skills. When Franky tries to separate the carts with his strength, Blueno uses his air door ability to get to the other cart to get Robin back. He easily defeats Sogeking and mocks Sanji for being unable for being no match for CP9 while stating they know nothing about Robin's past and it is for the best if she dies. Sanji tries to stop him from leaving with Robin since Robin held Blueno back from killing them due to the deal they made of letting the crew live, but is unable from stopping them from dissapearing.

Eventually, Blueno and the others eventually arrive at Enies Lobby. They then meet up with the other members that they haven't seen in years and their boss Spandam. Fukuro then tests the others Doriki and reveals that Blueno has a level of 820. When Spandam gives Kaku and Kalifa two Devil Fruits to eat for themselves, Jabra is shocked and scarred being around them. He also corrected Jabra on his view on Devil Fruits, when the latter was fearful that the two fruits Spandam presented to Kaku and Kalifa would cause him to explode upon contact, due to his own powers.

However, during the debriefing when the Straw Hats invade Enies Lobby, he notices Spandam's phone off the hook and realizes something is amiss. His instincts prove right as he meets Luffy on the roof of the Courthouse of Justice and engages him. He tells Luffy about how there are over 170 nations in unity with the World Government all over the world and declaring war at Enies Lobby will make them enemies of the whole world. Luffy does not care about that and decides to fight Blueno to get to Robin. Unlike their last encounter on Water 7, Luffy manages to break through his Tekkai as well as figure out the "Soru" move to battles him evenly. Not only that, Luffy reveals his new Gear Second technique to him, literally pounding the CP9 agent around the roof. After a bit more fighting, Luffy goes to finish him off with a Jet Bazooka, rather than dodging the attack, Blueno decides to take it head-on with his strongest Tekkai, Tekkai Gou, which allows him to stay on his feet after the impact. Luffy is then about to show his Gear Third technique to him, but Blueno collapses shortly thereafter, having been knocked out from the Gear Second move before in a delayed reaction.

After the Buster Call left Enies Lobby in ruins, Blueno turned out to be the savior of CP9, using his Air Door to protect them from the annihilation of the island by the Marine onslaught. Most of them had survived through their fights against the Straw Hats despite their injuries, except for Rob Lucci. Their leader had sustained so much damage from his battle with Luffy that he was in need of some serious medical attention. He and Jabra were the first to overhear Spandam's plans to capture them as scapegoats to blame for the failure of their mission, and later is seen walking along the Sea Train tracks with the others.

They reached St. Poplar and became street performers to earn medical funds for Lucci. He collected the money while Jabra, in his full wolf form, thrilled audiences by jumping through hoops of fire. After paying for Lucci's medical treatment, he sat at a café with Fukuro, Kaku, and Jabra as they waited for Kalifa and Kumadori to return with the shopping, reading a newspaper as the others joked around. After Lucci was discharged from the hospital, he and the rest of CP9 went for a bowling match. However, the Candy Pirates invaded the town, so CP9 dealt with the pirate problem. Blueno was seen kicking one of the pirates on the ship. While they were initially applauded by the locals for their actions against the pirates, the townspeople's view of the agents completely changed as they witnessed Lucci deal excessive justice on the defeated pirates.

Having given the residents of St. Poplar such a fearful image of themselves, the agents decided to leave the place. Just before leaving, however, they were given a flower as a sign of thanks by a little girl that was taken hostage by the pirates. Taking this gift and commandeering the Candy Pirates' ship, they sailed back to their homeland.Upon arrival, they spied upon the next generation of CP9 agents being trained. As they were watching, they found out the pursuers that Spandam sent had caught up with them. In order to protect their homeland from these people, the agents dealt with them. Blueno is seen holding Very Good's head and the Den Den Mushi Lucci uses to give their former leader a message. After Lucci tells Spandam that they would come back for him someday, the agents commandeer their pursuers' ship and sailed off from their homeland. However, the now planted flower the grateful girl gave them on their homeland is seen behind the silhouette of their ship in the distance. 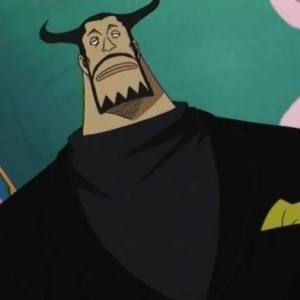 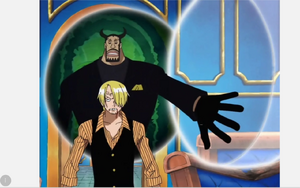 Retrieved from "https://villains.fandom.com/wiki/Blueno?oldid=3365086"
Community content is available under CC-BY-SA unless otherwise noted.