Make everyone obey his orders

Bluenose is a major antagonist in the children's television series TUGS. Specifically, he is the main antagonist of two episodes, "Regatta" and "Munitions".

He is an obnoxious naval tug who plays precisely by the rules and acts as a kind of stereotypical army sergeant towards the other tugs. He is annoying, bossy, pompous, and self-centred. He is notorious for putting orders before common sense. Bluenose also appears in TUGS footage in Salty's Lighthouse.

As mentioned earlier, Bluenose is an extremely arrogant and rude tugboat with a stereotypical drill sergeant type of attitudes. Bluenose also assigns the tugs to haul highly dangerous ammunitions to be taken and loaded onto a freighter. Ten Cents, one of the Star Tugs considers him even worse than the Z-Stacks, and in general, he seems to have managed to unite the Star Tugs and Z-Stacks against him.

Bluenose's rudeness and bossiness finally became his downfall when at a harbor delivery, he pushed in front of the others and bumped a barge full of ammunition which caused a fire. Bluenose's engine stopped working and he was left in shock. Ten Cents rescues Bluenose and is safe. Grampus the submarine arrives and takes the disgraced and still shell shocked Bluenose away. He is most likely punished severely by the Navy for his rude, bullying and reckless behavior and possibly was discharged. 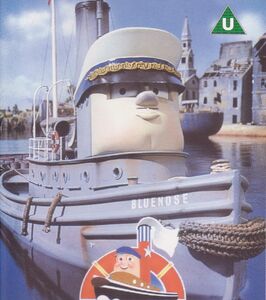