To expand their businesses (failed).

To cover up their crimes of pollution (failed).

BluffCo Industries was founded by the Bluff family, who were known for creating the town of Bluffington years ago. It also happened to be the largest employer in town as it varies through many fields of businesses.

However, it was not until Doug Funnie and Skeeter Valentine soon learned that the company (currently led by Bill Bluff) is dumping waste in Lucky Duck Lake, polluting it and causing the mutation of a giant (yet harmless) lizard, who the boys named "Herman Melville".

Doug and Skeeter decided to take the opportunity in using Herman to produce their story to the public in hopes that the lake would be cleaned up. However, school reporter Guy Graham learned about this and informed Bluff, who sends in Bob and the Bluff Agents to capture Herman at all costs.

After capturing Herman, Bluff plans to have Herman unleashed into the school's Valentine Day's dance and have his agents take him down in order to make himself look like a hero. However, Doug and Skeeter caught wind of this plot and managed to free Herman and deliver to a cleaner lake called Crystal Lake. 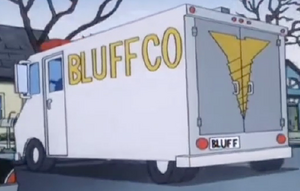 Retrieved from "https://villains.fandom.com/wiki/BluffCo_Industries?oldid=3545781"
Community content is available under CC-BY-SA unless otherwise noted.