Brutus (in some appearances)

Pestering both Popeye and Olive Oyl.

Defeat or kill Popeye (both failed).

Brutish Love Rival
Bluto is the main antagonist in the Popeye franchise and a nasty sailor who loves to pester Popeye and try to win the heart of his crush Olive Oyl. He varies between being a big strong brute of a man and very bold and smart. He is always depicted as extremely strong (often superhumanly so). However, after he usually beats up Popeye, Popeye finds a can of spinach, eats it, gets stronger, and beats Bluto into unconsciousness.

He was portrayed by the late Paul L. Smith in the live-action film, the late Allan Melvin in the Hanna-Barbera series The All New Popeye Hour, and the late Jackson Beck in the theatrical Popeye shorts.

Despite Bluto and Popeye's legendary rivalry, it is often shown that Bluto was once a friend of Popeye but the two became bitter enemies due to the fact that both were in love with Olive Oyl - while Popeye was a gruff but well-meaning sailor Bluto was always rough and mean, so naturally, he began to pester Popeye and even when Olive Oyl clearly made her choice he wouldn't let them be: going as far as regularly kidnapping Olive Oyl, expressing his affection as only the big brute can.

From time to time this friendship is rekindled, though it seldom lasts long, although Bluto is widely seen as Popeye's nemesis he is not actually the official archenemy of the sailor - that honor belongs to the Sea Hag: who Bluto has occasionally worked for both willingly and as a mind-washed slave.

The 1953 cartoon short Baby Wants a Battle has it that Bluto bullied Popeye even when they were both babies, and not only that but Bluto's father bullied Popeye's father. This, however, contradicts the comic's canon.

Bluto also appears as the main antagonist of the Disney/Paramount live-action Popeye movie where he was not only his traditional bullying self but also a shameless criminal who terrorized the fishing community Popeye came to. This movie was rather unique in that Popeye hated spinach and near the end, Bluto's own stupidity got the best of him when he force-fed Popeye spinach out of spite: the resulting transformation scared Bluto so badly the big bully literally turned yellow and swam out into the sea.

Bluto in the live-action film 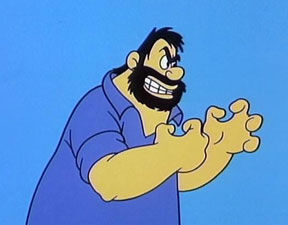 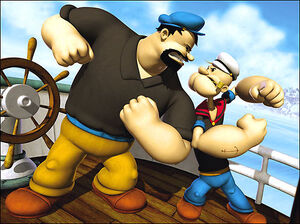 Bluto as seen in Popeye's Voyage: The Quest for Pappy 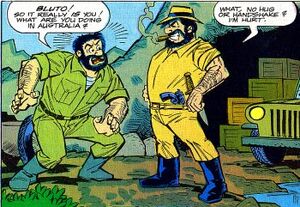 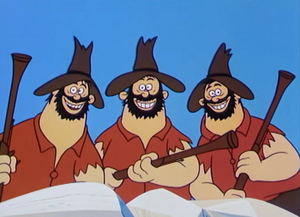 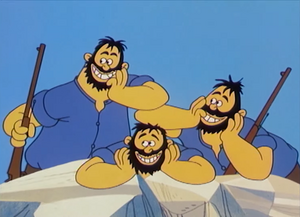 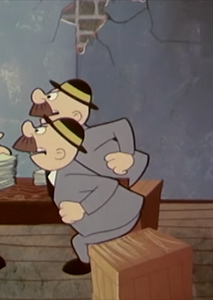 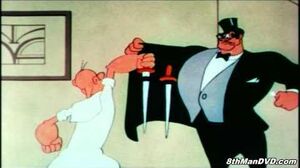 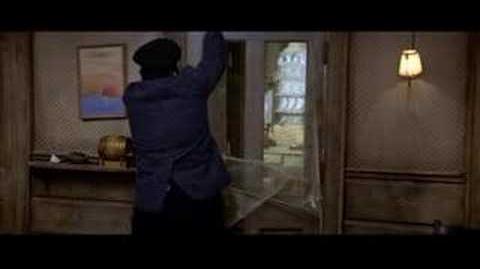