Boötes Belinda is an antagonist in Loonatics.

He was voiced by Bootsy Collins.

He is the bassist and the frontman of the popular musical group the Def Watt Rubber Ball Band. He is actually an animatronic mannequin playing figurehead to the band's puppetmaster, Rupes Oberon. The Def Watt Rubber Ball Band is a popular musical group fronted Boötes Belinda It consists of lead guitarist Wormbrain, the drummer, and the Keyboard Man whose real name is Rupes Oberon. Every member of the band is in fact an animatronic mannequin, including Bootes, except for Oberon, who controls the other three with his keyboard powers.

Despite the criminal intent behind the existence of the band, it was able to attain a great level of popularity, making at least one hit song and gaining a venue at the Cosmic Abyss Arena (perhaps a second to the WorldDrome) where they received an introduction by the outspoken business mogul Mr. Leghorn. This concert was where Rupes intended to begin his revenge on Zadavia, but their inclusion was most likely legitimate, more or less. 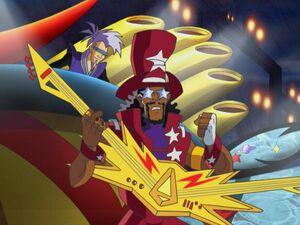 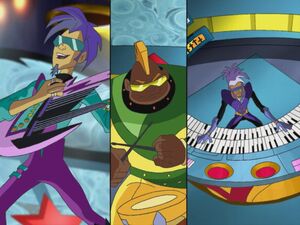 Retrieved from "https://villains.fandom.com/wiki/Bo%C3%B6tes_Belinda?oldid=3521066"
Community content is available under CC-BY-SA unless otherwise noted.