Bo-Katan "Bo" Kryze is a major anti-hero in the epic space opera franchise Star Wars, at first being the secondary antagonists in the Season 4 episode "A Friend in Need", one of the main antagonists turned anti heroine in Season 5, a supporting protagonist in Season 7, and also as a supporting character in The Mandalorian.

She was a member of the Mandalorian terrorist organization known as the Death Watch and was the right-hand and lieutenant of its leader, Pre Vizsla, as she conspired to overthrow the pacifist government lead by her sister, Satine Kryze.

She later came across the renegade Sith Lord, Darth Maul, and his apprentice, Savage Opress, and allied with them as they eventually formed a criminal empire known as the Shadow Collective and eventually lead to the ousting of Satine from power. But Maul took over Mandalore for his own sake and even killed Vizsla in a duel forcing Bo-Katan to rebel and conspire against Maul and his regime. She later appears in Star Wars Rebels as a guest character in the fourth and final season as she leads the Mandalorians to rebel against the Galactic Empire and their stranglehold on Mandalore.

She is portrayed by Katee Sackhoff in both animated and live-action adaptations. Sackhoff have also potrayed Amunet Black in The Flash and voiced Bitch Puddin' in Robot Chicken.

Bo-Katan Kryze was born on Mandalore during the final years of the Galactic Republic and was the sister of Satine Kryze. At some point in time, her sister took over the planet as its leader in the aftermath of a civil war on Mandalore which resulted in heavy losses and ultimately forced Satine to adopt a strict pacifist policy and abandon and abolish all of the warrior traditions and past that the Mandalorians were previously adherent to. Bo-Katan however, was opposed to this and joined the Death Watch to have her sister ousted from power and the Mandalorian people to embrace their warrior past once again. Bo worked alongside Death Watch leader, Pre Vizsla, and she proved herself to be a loyal follower and became his personal lieutenant and right-hand. In 21 BBY however, Death Watch was discovered on Concordia and was exiled to the snowy planet of Carlac in the Outer Rim Territories along with the rest of the Death Watch.

In 20 BBY, Bo and the Death Watch came into contact with Lux Bonteri, the son of the late Mina Bonteri, a senator of the Confederacy of Independent Systems, who was murdered by Count Dooku for her efforts to secure peace with the Republic. Lux wanted revenge against Dooku and so went to the Death Watch for help who also wanted revenge after Dooku ceased aid to their cause over disagreements over tactics.

Some time later, Bo-Katan participated in the rescue of the two brothers Zabraks Savage Opress and Darth Maul. Returning to Zanbar, Bo-Katan and Vizsla learn that their guests are Sith lords being also enemies with Obi-Wan Kenobi. Vizsla later forms an alliance with the Zabrak to both overthrow the New Mandalorians and take revenge on Kenobi. Their alliance is rapidly gaining momentum with the inclusion of the Black Sun, the Pikes Syndicate and the Hutt but Bo-Katan remains skeptical of these new allies until his leader reveals that he intends to eliminate them all.

One by one, the members of the now Collective of Shadows spread terror in the streets of Sundari so that the Death Watch would then appear as heroes in the eyes of their people, slowly making Duchess Satine look like a weakling incapable of defending Mandalore. As the popularity of the Death Watch quickly peaked, they invaded the palace and threw Satine into the cell. As expected, Vizsla betrays Maul and has him locked up. Unfortunately, the two Zabrak brothers escape and Maul challenges Vizsla to a fight to the death for the throne of Mandalore. In the end, Maul kills Vizsla and gains the loyalty of the Death Watch with the exception of a small group including Bo-Katan who refuses to let strangers rule over his world. Maul orders their killing just so they can escape.

The small group now named the Nite Owls, Bo-Katan repeatedly attempts to get her sister released, even allying with Kenobi but this ultimately leads Satine to be murdered by Maul in an attempt to break Kenobi after his capture. She helps Kenobi escape by asking him to bring Republic forces to Mandalore.

Towards the end of the Clone Wars, Bo-Katan and two other Nite Owls were on the cover on Oba Diah when the former Death Watch member spotted an old acquaintance, Ahsoka Tano struggling with the Pykes. She then follows Ahsoka to the Martez Sisters' workshop and asks for her help in the fight against Maul and his Mandalorian followers.

Supported by Ashoka and the Clone Troopers of the 302nd Company led by Captain Rex, the Nite Owls launch the Siege of Mandalore, leading to the capture of Maul after a long bitter fight. Bo-Katan encloses the fallen Sith in an ancient sarcophagus used to restrain Force users and honorably salutes Ahsoka Tano before she leaves for Coruscante on the eve of Order 66.

Upon the emergence of The Galactic Empire, Bo-Katan refused to follow Emperor Palpatine and ended up being driven from her home because of the Saxon Clan who had once supported Maul. Eighteen years later, Bo-Katan lent a hand to his old friend Ursa Wren to free Alric Wren, also allying with the rebel faction of Kanan Jarrus. After the rescue, the Empire responded by sending a weapon with an electric beam capable of reducing the Beskar to ashes with their carrier, a weapon that Sabine Wren created as an Imperial Cadet. Bo-Katan furiously confronts her for this but ends up joining forces with her to stop Tiber Saxon as well as the weapon. Following this victory, Sabine offered the Darksaber, the weapon that had once belonged to Pre Viszla, giving Bo-Katan the title of Mand'alor to guide his people against the Empire.

The Empire would eventually understand that Mandalore was inaccessible so it initiated an event later known as the Great Purge, causing the deaths of nearly all of the Mandalorians. Although surviving, Bo-Katan lost the Darksaber which subsequently fell into the hands of Moff Gideon.

9 years after the Battle of Yavin, Bo-Katan and his two allies Nite Owls, Koska Reeves and Ax Woves began operating on the aquatic planet Trask. They come to the aid of a Mandalorian bounty hunter Din Djarrin aka Mando and his adopted son Grogu being attacked by smugglers Quarren. Although Mando is grateful to them, he becomes hostile to them when they remove their helmets. Bo-Katan reveals his Mandalorian ancestry while explaining to Mando that he is a child of the Child of the Watch, Mandalorian fanatics following the ancient ways of their people. Wanting nothing to do with them, Mando sticks to his Mandalore Path credo and leaves the trio.

They save Mando from the Quarrels again in the evening, Bo-Katan hoping he'll at least have a drink with them. She then explains to him her plan to steal a cruiser to recapture a ruined Mandalore. Mando isn't interested until Kryze offers him the location of a Jedi in return for his help. The four Mandalorians inflict the cruiser, eliminates most of the enemy forces and seizes the weapons stored on board. The captain receives orders from Gideon to plunge the ship into the ocean. Despite the stormtroopers parenting the road, the Mandalorians reach the bridge and while Koska and Mando straighten the ship, Bo-Katan questions the captain about the location of the Darksaber but the man chosen to kill himself out of absurd loyalty. With the cruiser recovered, Mando gives Ahsoka Tano's location on the planet Corvus, hoping that Mando will help her cause someday.

Shortly later, Bo-Katan and Koska were having a drink at a bar when they were approached by Mando and Boba Fett. Mando asked for Kryze's help to rescue Grogu who had been kidnapped by Moff Gideon but Bo-Katan refused claiming he would never find Gideon. She then accuses Boba Fett of not being a Mandalorian, the latter declaring that he never claimed to be, which led to a verbal altercation between Boba and Koska which Bo-Katan quickly stopped. Mando then reveals to have Gideon's coordinates and that he will let the Nite Owls take possession of the Imperial cruiser to reclaim Mandalore, something Boba criticized due to the state of the planet, much to the disgust of Bo-Katan who treats Boba's unworthy of his armor when Boba retorted that his armor belonged to his father, which Bo-Katan instead referred to as a "donor" due to Boba being a clone himself. The former bounty hunter then threatened Bo-Katan for her disrespect, leading to a brief fight between him and Koska until Kryze stopped them and agreed to Mando's request so she could get the Darksaber back.

Following the infiltration plan, the group consisting of Mando, Fennec Shand, Koska, Bo-Katan and Cara Dune use a stolen Imperial ship which is falsely attacked by Boba aboard the Slave One to fool the Imperial forces when he approaches the cruiser. coming out of hyperspace. Once inside, the women storm the stormtroopers while Mando sneaks quietly to the cell block. The group manages to fight their way to the bridge, eliminating all Imperial forces but Bo-Katan notices that Gideon is not there. Later, Mando reaches the bridge with Grogu and a captive Gideon, much to Bo-Katan's shock as Mando now has the Darksaber, having taken it from Gideon defeating him in battle. Gideon then tries to take advantage of what this means to Bo-Katan so that she turns against Mando. The latter tries to return the weapon to Bo-Katan, even admitting defeat on the second attempt to give it to her, but she refuses because the Darksaber can only be obtained in battle. Subsequently, the Dark Troopers begin to perforate the armored doors of the bridge, but the group is rescued by the sudden arrival of the Jedi Master, Luke Skywalker. Understanding his defeat, Gideon grabs a blaster and fires at Bo-Katan who survives thanks to her beskar armor before the Moff fails to kill Grogu and is knocked out by Cara Dune. Bo-Katan and the others then witness Mando's farewell and Grogu leaving with Skywalker.

After Mando and Bo part ways, he eventually reunites with Grogu. The loss of the Darksaber ultimately causes Bo-Katan to return to her villainous roots, putting her into conflict with Mando and Grogu. 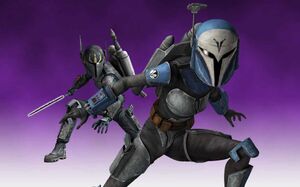 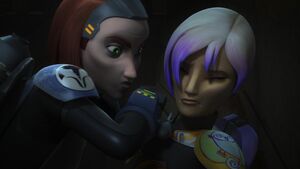 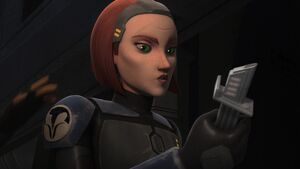 "You are a clone. I've heard your voice thousands of times."

Bo-Katan refuses to take the Darksaber.