Heiress to the Arness coffee conglomerate

To be the longest reigning champion (succeeded for a while, but then failed)

Bo Dallas (real name: Taylor Michael Rotunda) is a  current worker for WWE and a former NXT Champion. He is a heel wrestler who used to hold the record for longest reigning NXT Champion, before it was taken over by Neville.

Bo Dallas first turned heel when he caused him (who filled in for the injured at-the-time Oliver Grey) and Adrian Neville to lose the NXT Tag Team Championships. (Keep in mind though he still had a face character, and that this was unofficial) After that, he started to be booed by the crowd, more and more every week, thus creating a nationwide chant and hashtag known as "No More Bo". People, especially the ones in Florida (where NXT shows are taped), started calling Dallas the 'worst wrestler in NXT'. By June 16 of 2013, Bo Dallas was able to capture the NXT Championship from main roster talent Big E. Langston, with major heat from the crowd. A few weeks later, Bo Dallas began showing subtle heel traits by being disingenuous. By August 2013, the whole WWE Universe literally turned their backs against him, booing him out of the building while rooting for others, even if it were a heel (i.e. Leo Kruger) or an unknown (i.e. Mickey Keegan). Soon enough, Bo Dallas opened a challenge called the 'Bo Dallas Invitational' where any wrestler could go against him (except Sami Zayn), and the first one to beat Bo Dallas would be the #1 contender for his championship belt. During the invitational, Sami Zayn (disguised as El Local) defeated him, thus becoming the #1 contender. By then, Bo Dallas developed the habit of using an exposed turnbuckle to win his matches. Zayn defeated him, but JBL came in and saw Bo Dallas' foot on the ropes, so the match restarted. Bo Dallas then rammed Sami into an exposed turnbuckle to win it back, thus putting an end to that feud. He then started feuding with former partner Adrian Neville, after he defeated Dallas in a match. On December 18, a lumberjack match was held for the championship, where Dallas defeated Neville after Tyler Breeze (one of the Lumberjacks), pulled Bo Dallas out of the way, to get revenge for what Adrian did to him.

The next NXT Championship match was held on Febuary 27th, live on the WWE Network. It was a ladder match for the NXT Championship (which Adrian earned after defeating Bo within 4 minutes and 45 seconds). At NXT arRIVAL, Adrian Neville defeated Bo Dallas to win the NXT Championship, thus foiling his goal of being forever the NXT Champion. By April 10, he tried to occupy NXT, by gathering up all of who he thought were Bo-lievers. What he never knew was that before he came out, Adrian Neville secretly told the fans to turn their backs on Bo (which really wouldn't be by all means neccessary due to how everyone hates him). So, Bo trash talked about how Daniel Bryan created the widely popular "Yes Movement", and how he occupied RAW to earn a title shot at Wrestlemania. He also tended to just like Triple H did, call Bryan a 'B+ player'. Bo Dallas then tried creating the 'Bo Movement', and attempted to have the people 'join' him, so that 'their voices can be heard'. Right after the announcement, people literally turned their backs on him, as well as chanting very insulting and defamatory comments. He then tried to make them reconsider their actions by giving off what he did as he went into an emotional breakdown.

Of all matters of attempt, he failed. JBL then came out and told Dallas that he did the "worst attempt at occupy I've ever seen!", and that he does not have enough people in the ring "to occupy a seesaw". There was no title match that night. However, he was put into a match againts Justin Gabriel, in which he won.

For the May 1st edition, he was defeated by Tyson Kidd. And in the May 22nd edition, he had a stipulation match with Big E. The stipulation was that if he defeated Big E., then he got a title shot. But, if he lost, he would be fired from NXT, and supposedly WWE altogether. The result was that Big E. defeated Bo Dallas.

However, the day right after, he debuted on RAW and Smackdown, defeating Sin Cara in both debut matches.

On the July 4th tapings, Bo Dallas defeated Diego (one half of Lost Matadores, Fernando not at ringside due to a sideliner injury). He might have turned heel after slamming El Torito, although it is unknown wether or not it was accidental or intentional. Looking back at the tapings, Bo said to El Torito that to grow taller, he must bolieve. Torito instead gave Bo a Gore to the rear end. After scolding Torito, he then 'twerks' Bo, with things ending out with a bodyslam, and it turns out to be intentional. The following on RAW, he threw offenses at El Torito. He said that he never ducks at a challenge. Ducking is when you go low to avoid something, and he is trying to say that El Torito is too short fight many competitors as Bo has (his opinion). He also got down on his knees to "even things up". However, it may have also been a mockery to Torito's height. In the end, he defeated Torito, and during his victory lap, he assaulted Torito again by knocking him over. He is now shown to have a mean streak against El Torito.

Another thing shown is that he seems to look more insane as every match goes by, such as when he defeated Damien Sandow.

On the July 25th tapings, during Miz TV, Bo managed to get along well with The Miz, which possibly meant that The Miz was a Boliever. However, Dolph Ziggler came out, and insulted the two, saying that they both have something in common; they are both "full of crap." After a subtle argument, Dolph attacked The Miz, with Bo taking a cheap shot at him with his microphone, solidifying his heel run. A match was then set up by The Authority, and Bo won after Miz distracted Dolph. However, he did get retribution after kicking Bo in the face.

Bo's winning streak ended in a loss to R-Truth, an opponent he had previously defeated. Bo lost a second time to Truth when he was disqualified for excessive force in a following Smackdown. He started to show a bit that he is starting to lose his sanity after that match and by Spetember 3rd, 2015, has even said in a Backstage Interview that when he beat R-Truth on Smackdown that he found beating him up was funny, and that he was going to be more "humurous" soon. 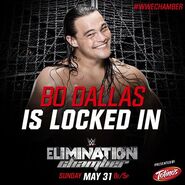