Villains Wiki
Register
Don't have an account?
Sign In
Advertisement
in: Article stubs, Once Upon a Time Villains, Female,
and 17 more

Bo Peep (Once Upon a Time)

Bo Peep was a minor villain from Once Upon a Time. She only appeared in the episode "White Out" and served as the main antagonist in said episode.

She was portrayed by Robin Weigert.

She was a warlord that was set on getting David's farm and their flock of sheep from his mother, Ruth. She was portrayed by Robin Weigert.

Bo Peep often visited a few times and asked if he had his dues ready, even knowing that David didn't have them. The next day, Bo Peep made Anna disappear with her Shephard's Crook. In the end, she and her guards were defeated by David. 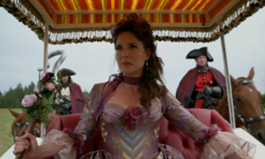