According to religious belief, the Grimm were created by the God of Darkness to offset the God of Light's creations of life.

In "The Badge and The Burden", Professor Peter Port brings in a captured Boarbatusk and asks for volunteers to show off their fighting prowess by battling it. Weiss Schnee volunteers in an attempt to make herself stand out, and is set to fight the Grimm in front of the class.

In "The Badge and The Burden, Pt.2", Weiss battles the Boarbatusk, which rams at her and uses its tusks to fling her weapon across the room. She manages to barely dodge it as it charges around the classroom trying to kill her, soon getting back to her weapon. The Grimm tucks itself into a ball and rolls to ram her, which she blocks with a Glyph. As the Boarbatusk is stunned, Weiss takes advantage of its situation and charges it, flipping it over and impaling its stomach with her rapier, killing it.

In "No Brakes" and "Breach", Boarbatusks are among the Grimm breaching into Vale. Many attack the Huntsmen and Atlesian Knight-200s, but are killed off.

Boarbatusks are common enemies found throughout the game, being wild in places like Forever Fall, the Emerald Forest, and Mountain Glenn and with some unleashed by Dr. Merlot and Merlot Industries. They are vulnerable to team attacks and can be stunned if successfully blocked or evaded.

In the episodes detailing the Fall of Beacon ("Battle of Beacon", "Heroes and Monsters" and "End of the Beginning"), Boarbatusks are among the Grimm invading the city, battling police and Huntsmen.

Since she killed a Boarbatusk, Weiss is able to summon an avatar version of the creature as a part of her Summoning Glyphs. She accidentally does this in "Tipping Point", where she becomes angered at a rude and insensitive party-goer mocking the Fall of Beacon and unintentionally releases a Boarbatusk avatar on her.

Weiss is later able to control her Summoning, and summons a Boarbatusk avatar to scare Nora Valkyrie in "Rest and Resolutions".

Boarbatusks appear as a unit in RWBY: Amity Arena; when deployed, they march towards targets slowly, then quickly spin and roll into enemies, doing massive damage. Afterwards, they will continue to attack with their tusks for great damage.

Boarbatusks are extremely fast and strong, using charging as their main means of attack. Their armor protects their upper halves, and they use their massive curved tusks as ramming weapons or to hassle/grab onto enemies. If needed, they will curl up into balls (similarly to an armadillo), and spin/roll at incredible speeds at their enemies. Despite this, they seem to be one of the easier Grimm to defeat, being taken down easily by trained Huntsman and with some effort from Huntsmen-in-training and police units. 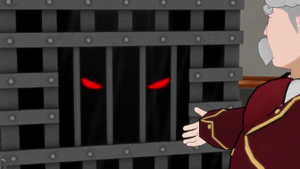 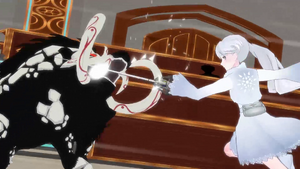 Weiss Schnee vs. a Boarbatusk. 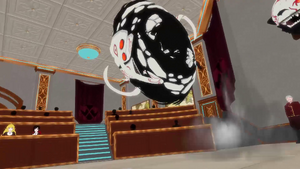 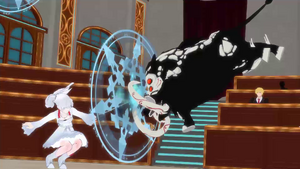 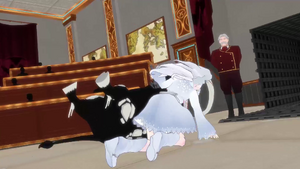 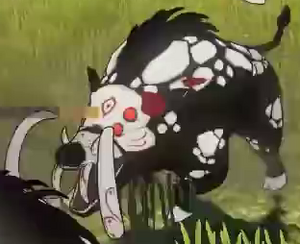 A Boarbatusk in RWBY: Grimm Eclipse. 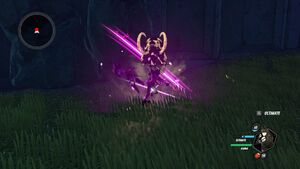 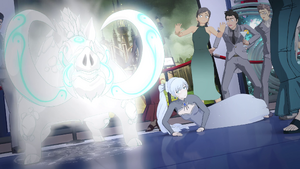 Weiss accidentally summoning an avatar of a Boarbatusk. 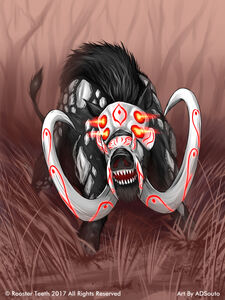 A Boarbatusk Grimm card for the board game RWBY: Combat Ready. 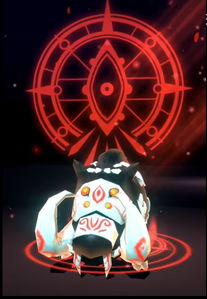