Minion
Bob is a Mobile Suit pilot in the Delaz Fleet and a minor antagonist in Mobile Suit Gundam 0083: Stardust Memory. He is a Zeon soldier who became part of the Zeon remnants after the war ended and one of the pilots who assists Anavel Gato in his theft of the RX-78GP02A Gundam "Physalis".

On 13 October U.C. 0083, Bob took part of the first stage of the Delaz Fleet's Operation Stardust plan. He served as second-in-command of a strike team led by by Anavel Gato that assaulted the Earth Federation's Torrington Base in Australia. Alongside his subordinates Gaily and Adamski, Bob assisted Anavel Gato in stealing the nuclear-armed RX-78GP02A Gundam "Physalis". With his Xamel's cannon, Bob destroyed the Torrington Base and killed the Base Commander Hawkins Marnery.

While the Zeon forces escaped with the Gundam GP02, Bob stayed behind and sacrificed himself to hold off South Burning's MS team from pursuing them. Bob engaged Burning's GM Kai and was killed when Burning thrust his GM's beam saber directly at Xamel's cockpit. 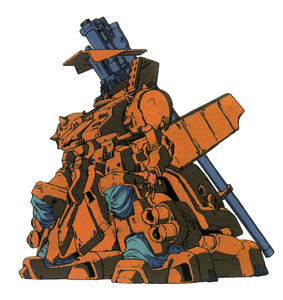