Villains Wiki
Register
Don't have an account?
Sign In
Advertisement
in: The Simpsons Villains, Animal Cruelty, Cartoon Villains,
and 23 more

Bob Arnold is the corrupt, former congressman for Springfield's State. He is the main antagonist of the Simpsons episode, Mr. Lisa Goes to Washington. At first, he seemed like a decent guy, as evidenced by Moe and Barney's opinion of him, and even Lisa's. However, prior to Lisa's first encounter with him, he was talking to a lobbyist representing the Timber Company about tearing down Springfield Forest.

He was voiced by Hank Azaria.

After her outstanding speech, Lisa went to meet Congressman Arnold himself and was very proud to be with someone like him, but only until shortly after he heard him talking in secret with another man so that, in return for a bribe, The forests of Springfield would be cut.

To his disappointment, Lisa, who was participating in a contest to give speeches about how good the country was, decided to change what she was going to say and talk about corruption in the United States, also revealing what she heard from Bob Arnold.

Leaving her perplexed to those present, including her own family. Shortly after the speech, the FBI arranges a sting operation and Bob Arnold is arrested, being found guilty of his actions and expelled. He becomes a born again Christian while in prison. 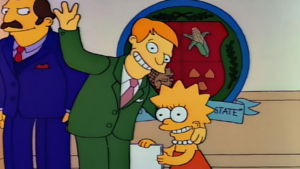 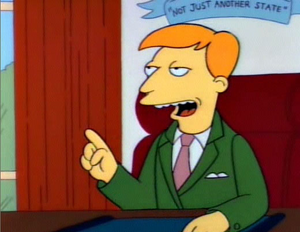