Giving stories in the media (both true and/or false)

Keep Mundus and the Demons in power.

Robert "Bob" Barbas is an antagonist in the videogame DmC: Devil May Cry. He is the Demonic TV news reporter and owner of media corporation Raptor News Network and is the undisputed "King of Media". He is one of the Demons holding power and control over Limbo City and he wants Dante dead.

He was voiced by Louis Herthum.

Bob is a textbook hero-hater who seems to be a devout follower of religion and feels that he is doing "God's work" by publically intimidating and demonizing Dante and the other "terrorists" (though the God he referred to is probably Mundus). His radical and extremist views on human morality means that he will do whatever it takes to antagonize Dante. Though at the beginning of the game, he is shown as a recurring gag character, he is later revealed to be a degenerate and corrupt demon lord. Bob is extremely dependable, arrogant, and loyal to Mundus, during boss battle constantly taunting and intimidating Dante with power of his master.

In his human form, Barbas is an overweight middle-aged man, with a terrible comb-over and wearing a crisp suit.

In his Demon form, Barbas is a large digital head that resembles his head.

The first glimpses of Barbas are of his newscasts, where he often uses his show on Raptor as a soapbox to talk about his own personal beliefs, and usually to spread propaganda to the public, controlling the overall opinion Limbo City has on people like Dante and groups like The Order. Later on in the story, Dante sets his sights on "taking Bob off the air," and makes his way through an upside-down section of the city in order to reach Bob's news tower.

In this upside-down area of Limbo, Bob tortures humans who do not follow Mundus' orders in his own personal prison. Once Dante arrives at the Raptor News Network tower, he encounters Bob Barbas' demonic form.  During the battle, Dante's "go inside" Bob and fight his way through hordes of Demons that attacked him while Bob reports the incident as "violent, shocking footage" of Dante murdering innocent people, commenting on his background and making Dante seem like nothing but a violent terrorist, who even spread sexual disease.

During the battle, Bob reports that The Order is being raided by SWAT teams. This only angers Dante, while Bob taunts him that they cannot hope to defeat Mundus. At the end of the battle, Dante shoots Bob Barbas' human form, killing him after he says "you're fired", and acquiring the Aquila.

Bob is able to control Limbo to some extent, bending reality to his desires and creating hindrances to stop Dante. Among his abilities is a powerful beam of energy emitted from the Raptor News Tower's core that is able to disintegrate large spaces of matter and deal considerable damage to Dante as he ventures closer to Bob's lair.

Bob Barbas's true form is confronted at virtual core of his tower. During boss battle he alters reality freely, attacking Dante with electrical discharges and pixel holograms. When deprived of health, Bob can transport Dante in fake virtual broadcasts depicting him "slaughtering innocent civilians", which, in fact, are Bob's Demon minions. The only way to materialize Bob and deal damage to him is to hijack his power supply channels by attacking with the weapon Eryx, which leave him temporarily vulnerable to Dante's attacks. 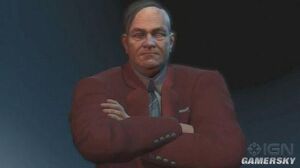 Bob Barbas in his human form. 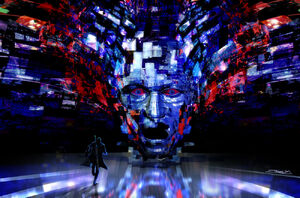 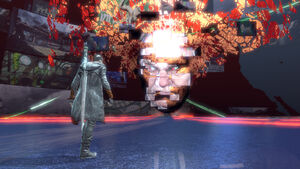 Retrieved from "https://villains.fandom.com/wiki/Bob_Barbas?oldid=3667565"
Community content is available under CC-BY-SA unless otherwise noted.