Kidnap more and more young girls, kill them and rape their corpses (succeeded).

Bob Wolverton is the main antagonist in the 1996 exploitation film Freeway. He is a brutal serial killer of teenage girls and the archnemesis of protagonist Vanessa Lutz.

He was portrayed by Kiefer Sutherland, who also portrayed David in The Lost Boys, John "Ace" Merrill in Stand By Me, Freddie Lee Cobb in A Time To Kill, The Caller in Phone Booth, Jonathan Kendrick in A Few Good Men, Senator Quintas Corvus in Pompeii, and Bosco in Marmaduke.

Outwardly, Bob appears to be a model citizen: He presents a kind, compassionate demeanor, works as a guidance counselor for troubled youth and has a beautiful home with his socialite wife, Mimi. Beneath the facade, however, he is a sadistic serial killer, rapist and necrophile who preys on teenage girls, whom he picks up hitch-hiking. He also collects violent child pornography and tortures animals. He rationalizes his actions by condemning his victims as "garbage people" who do not deserve to live. He is known in the media as the "I-5 Killer".

Bob crosses paths with a 15-year-old girl named Vanessa Lutz (whose tragic background involves her being sexually abused by her drug addicted mother's boyfriend) on the freeway after her car breaks down. She tells Bob that she is planning to visit her grandmother outside of town since her mother, who works as a prostitute, has been arrested, and Bob offers her a ride. Along the journey, Bob gets Vanessa to confide in him about her unhappy childhood, and pretends to offer her help to get her to lower her guard. Once she trusts him, however, he attacks Vanessa and tries to rape her, but she grabs a gun she had received earlier and shoots Bob multiple times.

Vanessa is arrested for attempted murder, as the police do not believe her story since she has a long criminal record. Meanwhile, Bob is revealed to have survived his injuries but is now severely disfigured, forcing him to speak with an artificial voicebox. Later on, the police discover evidence at the crime scene that supports Vanessa's story. As they search Bob's house, they find a shed full of child pornography and human and animal remains. Upon realizing what her husband really is, Mimi commits suicide.

When Bob returns home, he finds the police waiting for him and flees, traveling to Vanessa's grandmother's house. Vanessa manages to escape from her prison cell with various other inmates and goes to meet her grandmother, only to find that Bob has murdered her and presumably raped her corpse. Bob lies waiting for her in her grandmother's bed (in a scene reminiscent of Little Red Riding Hood) and they begin to fight. Eventually, Vanessa gains the upper hand and strangles Bob to death with the cord to his artificial voice box. 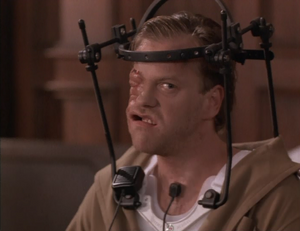 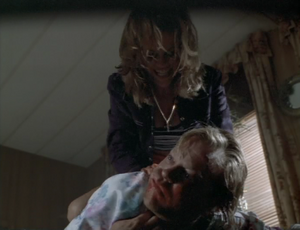 Bob being strangled to death with the cord to his artificial voicebox.