Bob is the main protagonist of the Jonathan Coulton song "Re: Your Brains". He is an intelligent and affable member of a zombie horde who tries to convince his former coworker Tom to let him and his horde in to eat his and other survivors' brains.

He was voiced by Jonathan Coulton himself.

While it is unknown how Bob became a zombie, it is likely he was bitten or was killed and infected.

At the beginning of the song, Bob addresses his former coworker Tom, greeting him and saying that it is good to see him again. He explains that he is now a zombie, and that he and his horde would like to be let into the shopping mall where Tom and other humans are hiding. Bob explains that he intends on eating their brains slowly and painfully, but that it is inevitable and it would be in his best interest to give up and get it over with instead of prolonging it.

When Tom refuses to give in, Bob politely criticizes him for not seeing the "big picture", and asks him to reconsider. He tries to compromise and find some way Tom will benefit from letting him and the horde inside, but to no avail. Bob thanks Tom for his time and goes back to report to the other zombies, swearing that he will put their disagreement to rest when he finally gets in and eats his brain.

Despite being a cannibalistic monster, Bob is very well-spoken and polite. He tries to find a way to compromise with the survivors into allowing him to eat their brains, and thanks them for meeting with him even when they understandably lock him out. His feral instincts kick in every once and a while when he proclaims how he is going to brutally murder the survivors, but is quick to justify them and tries to explain how the zombies are not unreasonable in their demands. 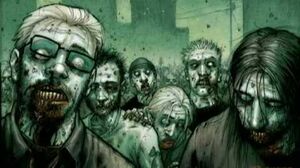 Re Your Brains by Jonathan Coulton with lyrics HQ
Community content is available under CC-BY-SA unless otherwise noted.
Advertisement