Bobby (pictured left), Tobby (pictured right) and Flobby (pictured top center) are the secondary antagonists of the now famous LazyTown episode "Robbie's Dream Team". Bobby, Tobby and Flobby were originally traveling performers who (coincidentally) wore similar outfits to Robbie Rotten. Eventually, after realizing he needed help to complete his evil schemes, Robbie ordered the three over the phone and trained them to be villains. Much like Robbie, Bobby, Tobby and Flobby shared internet popularity when the song "We Are Number One" became a meme.

After falling into one of his traps meant for Sportacus, Robbie Rotten realizes that he is going to need help with his evil plans if he's ever going to succeed in ridding LazyTown of Sportacus.

Retreating to his lair, Robbie picks up the phone and tries to order a villain. When asked by the person over the phone what kind of villain he would like, Robbie states that they probably don't have anyone like him, only to realize that they do, resulting in him ordering three villains like himself and asking for extra speedy delivery. Almost instantly, Bobby, Tobby and Flobby fall down the entrance to Robbie's lair and introduce themselves. Bobby then explains that he Tobby and Flobby perform for birthday parties, anniversaries, conferences, mall openings, carnivals and barmitzfahs, performing a small dancing routine as an example of their talents while also peaking Robbie's interest. When asked about who he is, Robbie states that he is the greatest villain in the entire world and tells the trio that they are going to help him get rid of "Sportafloppy". However, when Robbie compares Sportacus to a kangaroo, Tobby and Bobby think that he wants them to look for a blue kangaroo, and when Robbie explains himself, the trio believe Sportacus to be a man in a kangaroo costume.

Realizing his minion's incompetence, Robbie asks them if they are actually real villains, asking about their experience with capturing superheroes and knowledge of disguises, and is disappointed to learn that they have a serious lack of knowledge on being evil. As a result, Robbie decides to teach them how to be villains, kicking off the infamous song, "We Are Number One". Robbie begins to play a tune on his saxophone, which triggers Bobby, Tobby and Flobby to start playing a guitar, a trumpet and some drums, proclaiming "We are number one". Soon after, Robbie tells his minions to listen closely and explains that, in order to be number one villains, they must chase a superhero on the run and, after Sportacus passes by, orders them to follow him and sneak around, although Bobby ends up stepping on a branch and creating noise, angering Robbie. Throughout the rest of the song, Robbie uses multiple traps to try and trap or incapacitate Sportacus, but, due to his henchmen's incompetence, they all end up failing; they try to catch Sportacus mid-flip with a butterfly net, but the trio time their swing wrong and end up falling on to each other, they try to throw a net onto Sportacus, but they end up throwing it on top of Robbie instead, they try to make Sportacus slip on some banana peels, but the trio walk onto the peels instead, they try to trip Sportacus and hit him with a bucket, but Bobby gets distracted and they end up tripping and hitting Robbie instead, finally, they try to trap Sportacus in a hole, but he avoids this and the trio get stuck inside it instead.

After their song, Robbie shows the trio how to create a sugar apple and tells them that they are going to give Sportacus the apple and send him into a "sugar meltdown". Bobby, Tobby and Flobby then watch as Robbie disguises himself as an old woman and idiotically mistake him for a different person before gleefully watching Robbie's plan to give Sportacus the sugar apple succeed. Bobby, Tobby and Flobby are then ordered grab Robbie's cage, carry the unconscious Sportacus to lair and wait for further instructions. Unknown to Robbie or his minions, Stephanie and Stingy realize that something has happened to Sportacus after he fails to arrive and save Stingy from falling and that Robbie is involved with his disappearance.

Soon after, Stephanie and Stingy oversee Robbie talking to Tobby from behind his para-scope and learn that Sportacus has been captured. Meanwhile, after being ordered not to fall asleep while watching Sportacus, Bobby keeps a watchful eye on Tobby and Flobby to make sure they stay awake, however, they all end up falling asleep anyway and because of this Stephanie and Stingy are able to put a real apple down the para-scope and revive Sportacus' strength. After Robbie unknowingly wakes them all up, Tobby realizes that sitting around and doing nothing is incredible boring and the others agree with him. At that moment, Sportacus tells the trio about sports, frees himself and plays soccer with the three of them and then tells them that playing outside is much more fun.

As the trio and Sportacus play soccer outside, Robbie, confused with their actions, angrily asks them what they think they're doing before accidentally blasting himself out of LazyTown with his own cannon. In the end, after Sportacus and Stephanie save Robbie, the trio confront him and finally decide they dislike being villains and prefer sports instead. 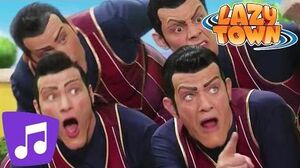 Retrieved from "https://villains.fandom.com/wiki/Bobby,_Tobby_%26_Flobby_Rotten?oldid=4071406"
Community content is available under CC-BY-SA unless otherwise noted.