Kill Nick Walker, Roy Pulshiper, Julia Walker or anyone who stand in his way (failed).

Assemble the staff of Jericho so the dead never have to crossover to the afterlife (failed).

Robert "Bobby" Hayes is the main antagonist of the 2013 fantasy action comedy film R.I.P.D.. His henchmen include his second-in-command, Stanley Nawlicki, and the Deado army.

He was portrayed by Kevin Bacon, who also played Sebastian Caine in Hollow Man, Sebastian Shaw in X-Men: First Class, Sean Nokes in Sleepers, Jacques in Super, Wade in The River Wild, Martin Thiel in Criminal Law, and Ray Duquette in Wild Things.

Detective Bobby Hayes stole some pieces of gold from busting a drug deal along with his friend from the police Nick Walker. Nick feels doubtful and regrettable over this to Hayes. Hayes tries to reason with Nick saying that he should use the gold to start a new life with his wife, Julie. They were both called to arrive at shootout that takes place at a meth lab in a warehouse.

The two police officers arrive and fight the criminals. Hayes later points a gun at Nick and shot him, killing Nick and made him plummet down from the rail. Hayes later pins the murder on a criminal from the shootout.

Nick Walker was recruited into the R.I.P.D. in the afterlife and was assigned to a partner Roy Pulsipher. It turns out that five years ago Bobby became a Deado when a junkie shot him for taking cocaine and bribes. When Bobby is taken into the RIPD headquarters he and some other Deados' steal the gold that is needed to build the staff of Jericho by unleashing a sphere-like object that slows-down the officers but allows Bobby and the Deados' to be unaffected. Bobby kidnaps Nick's wife Julia and plans to use her as a human sacrifice using the Staff of Jericho where he reveals himself as a monstrous and abominable ghost. Luckily, Nick and Roy appear and dispatches his entire Deado army after a gun war with them. Finally, Nick shoots Bobby and avenges his own death. 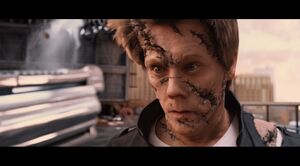 Bobby's last moments before being erased.
Add a photo to this gallery
Retrieved from "https://villains.fandom.com/wiki/Bobby_Hayes?oldid=3470514"
Community content is available under CC-BY-SA unless otherwise noted.