Bobby Lion is a one-time villain from the classic Cartoon Network show My Gym Partner's a Monkey, only appearing in "Ingrid Through the Out Door". He is a student at Marlin Perkins Wild High School, who dresses as the human school mascot.

He was voiced by Phil LaMarr.

In "Ingrid Through the Out Door", Ingrid Giraffe was abruptly transferred up to high school. There, she was repeatedly mauled and maimed by tons of vicious, hormonally confused, teenage predatory animals. She was eventually saved by the older siblings of her friends, as well as her older sister, Inga Giraffe. Inga mentioned to her that one of the students there went by the name of "Bobby Lyon", as she gestured to a human student, who looked close enough to Adam Lyon, that he could easily be seen as his older brother. Ingrid quickly developed a crush on him, seeing Bobby as a stronger and more mature version of the wimpy and childish Adam Lyon. It wasn't until after she asked him out, that she learned Bobby wasn't who she thought he was. Bobby was a "Lion", but not a "Lyon". He then revealed that his human appearance was merely a costume, he wore, portraying the animal school's human mascot. He then took it off and revealed himself to be a horrid, bloodthirsty lion, who hadn't had his lunch that day. He then then bent on eating Ingrid Giraffe whole. Ingrid ran away, screaming in fear and went all the way back to Charles Darwin Middle School.

Bobby Lion is a large, muscular lion with light yellow fur and an orange mane. When he's not in costume, he has a white gym shirt, blue gym shorts, and a blue baseball cap.

His human costume depicts a Caucasian teenage boy with messy orange hair, similar to Adam's. He has acne on his cheeks and three small beard hairs on his chin. He wears a blue shirt with a white collar and white sleeve rims, long blue saggy jeans, held up by a brown belt, and red sneakers. 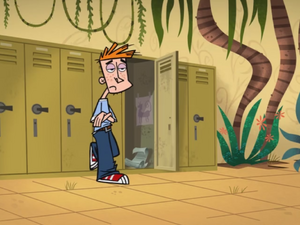 Bobby Lion in his disguise.
Add a photo to this gallery

Retrieved from "https://villains.fandom.com/wiki/Bobby_Lion?oldid=3458735"
Community content is available under CC-BY-SA unless otherwise noted.