Member of the Reject Club

Bobert is a supporting character in The Amazing World of Gumball. He is a high-tech robot who attends Elmore Junior High, and is by far the smartest student in the school, even smarter than Anais, William, Carmen, Billy, and the Eggheads. He is the main antagonist of "The Robot", "The Bet", and "The Loophole", and one of the antagonists of "The Club"

He was voiced by Kerry Shale.

There was one episode in which he is the main antagonist and that episode was "The Robot", but this was not the only episode in which he is the villain. He felt like he wanted to be a real boy, but did something that was truly evil, stealing Gumball's identity and replacing him. Gumball and Darwin fought him in the backyard, but Bobert seemed to gain the advantage on both of them, and just when he was about to kill a weak Gumball (proved when he said to him "There can only be one"), the water from the sprinkler poured on the robot, short-circuiting him. Bobert eventually came to, and tried to plea with Gumball not to reboot him, but the coaxing did not work and he eventually got rebooted. Later, after the episode at the end scene, he implies that he will steal Darwin's identity, proven when he imitates him. However, whether Bobert steals Darwin's identity and gets defeated and rebooted once more afterwards or not is unconfirmed.

He is the secondary antagonist of the episode "The Club" were, along with Ocho, helps out Frank and Bean in putting a cruel and destructive viral video into Elmore Stream-It when Gumball refused to join their club, the Reject Club. He turns into a giant robot again in order to stop Gumball, Darwin, and Anais from advancing further to the Elmore Junior High computer, where the Wattersons were planning to delete the video, but he is quickly foiled by Anais when she creates an electrical charge in order to render Bobert immobile. His fate is that along with the rest of the club members, Bobert was dropped off at the mall naked.

He is the main antagonist again in the episode "The Loophole", when Gumball and Darwin try to help Bobert be a modern citizen, but Bobert keeps doing things literally. At the Elmore Mall, he shoots Miss Simian’s fur off of her body, tries to shoot Gary at close range, tore the mustache off a security guard and destroyed a wall paper. Bobert scanned all life forms, and decided to eradicate mankind. He stopped the internet from working and took all the money away, causing the citizens of Elmore to fight and steal stuff. Bobert attempts to ahnilate the entire world for extinction, but were stopped by Gumball and Darwin and cancels the final extinction plot. Then, the boys ask him politely to help them out with their homework, ending the episode.

Take note that out of all of the minor characters that were villains in the show, Bobert seems to be the most evil. Even Carrie and Tobias stopped what they were doing before it got completely out of hand. However, Bobert's actions were simply because he wanted acceptance and is not a villain in other episodes even trying to teach Gumball how to use the internet, though he had to "reboot" Gumball because his brain could not handle all of the information the internet had. That said, Bobert is far less dangerous than Rob, the show's main antagonist and who like Bobert, used to be one of Gumball's classmates before turning on him.

Bobert has difficulties processing human emotions and necessities. He is a highly analytical who calculates everything that he observes into a quantitative formula of some sort. Despite this, Bobert is known to be occasionally envious and halfhearted towards his organic classmates, and on at least one occasion has attempted to become a real boy, which in turn developed into him trying to steal Gumball's identity, steal his family and best friend, and get a kiss on the lips and a date with Penny. Since Bobert has such a scientific outlook on the world, he is one of the most intelligent and clever students at Elmore Junior High, and is undoubtedly the smartest in Miss Simian's class. As a result of him being so unemotional and manipulative, Bobert is almost unfairly called a nerd by his classmates and is a member of The Reject Club along with the Eggheads and Ocho. He takes words literally and interprets them as commands.

In later episodes, Bobert seems to be much more comfortable with his robot status. While he still longs to fit in with his classmates and find friends, no longer is he trying to do anything extreme to reach such goals. He instead prefers to be accepted for the robotic buddy he is, as seen in "The Upgrade".

Overall he is later a fairly kind robot in most episodes. He is heroic and brave in "The Agent". He protects Gumball and Darwin, and takes them back to Elmore Junior High. In season 6 he is shown as much more expressive and human-like, instead of lacking some emotions like before. He is able to feel love. 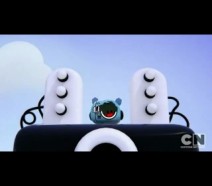 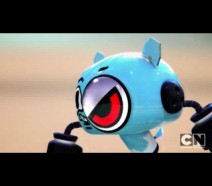 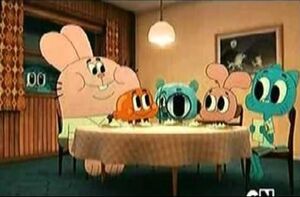 Bobert as a giant robot. 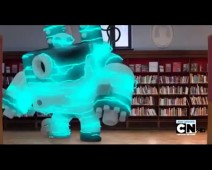 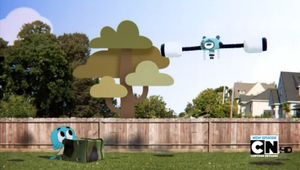 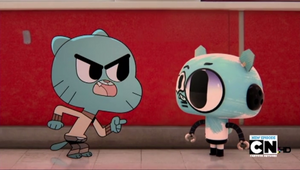 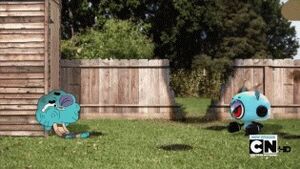 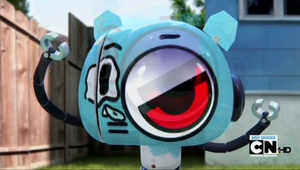 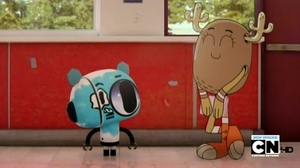