Summoning watches from his mouth
Creating wind gusts with his wings

Animalistic Pirate
Bobo is a bird-resembling boss character fought in Wario Land: Super Mario Land 3 and in Wario Land II released on the Game Boy. He is apparently kept as a pet by the Black Sugar Gang. In both games, Wario fights the feathered fiend on the S.S Tea Cup, Captain Syrup’s pirate ship, and is one of the few Brown Sugar Pirates crew members to appear in more than one game in the Wario Land series.

Bobo is the boss of the fifth world known as the S.S Tea Cup. The battle opens with a gigantic Bobo flying into the battle arena from the right. He has two forms of attack. The first one is to create gusts of wind to push Wario into the pit at the left end of the arena. The second attack is the summoning of Watches, bird-like enemies that Wario encounters during his adventure on Kitchen Island, from his beak that will charge towards Wario. In order to win the battle, Wario must jump on the Watches to make them fall on the ground to be picked up by Wario and finally thrown at Bobo’s head. Wario must hit Bobo's head a total of three times to defeat him. Alternativley he can win the fight by turning into Dragon Wario, a power up that can be obtained by collecting an item known as the Dragon Pot.

Wario encounters Bobo for a second time on the S.S Tea Cup in Chapter 2, Story 5 as the second boss of Wario Land II. In this game, however, Bobo has shrunken tremendously in size, and he can no longer summon Watches from his beak like he could in the previous game. When faced in battle Bobo dives at Wario with his powerful talons and also whips up a powerful gust of wind with his wings that lifts Wario off the ground temporarily. In order to defeat Bobo, Wario can either jump or ground pound on his head while Bobo is charging towards Wario. After three hits Bobo’s health reaches a critical low and turns bright red, at which point two hits are sufficient to fell the bird – whose ultimate fate is unknown as he falls of the screen. 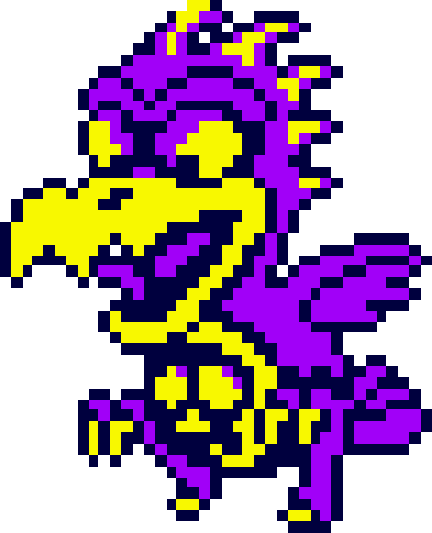 Bobo's sprite in Wario Land II.
Add a photo to this gallery

Retrieved from "https://villains.fandom.com/wiki/Bobo?oldid=3914586"
Community content is available under CC-BY-SA unless otherwise noted.