Taunting and torturing his enemies

When he was young, Boc Aseca wanted to be a Jedi but was rejected because he was too old. That eventually drove him crazy and led him to the Dark Side of the Force, where he was found and trained by the Imperial Inquisitor and former Jedi Knight turned Dark Jedi Jerec. Boc was one of Jerec's seven Dark Jedi and his most crazed, sadistic, and unpredictable enforcer. He aided his master Jerec in his quest for the Valley of the Jedi which eventually led to his encounter with Jedi Knights Qu Rahn and Kyle Katarn. Boc attempted to fight Rahn when he was captured, but he was quickly beaten by him along with his fellow Dark Jedi Yun, Gorc as well as Maw. Rahn was soon decapitated by Jerec and Borc survived the fight without any injuries like his friend Maw.

Boc accompanied his boss along with the other Dark Jedi on Kyle's home planet of Sulon. He, Sariss and Yun were tasked with going to Katarn's homstead and transfer all the pieces of the Valley's map to their ship. Later, they went to their Imperial tower at Beron's head to work with the droid 8t88. After their job was finished, Jerec, Sariss, Maw and Boc went to Planet Ruusan and left Yun, Gorc and Pic behind to deal with Katarn. They were all defeated and Katarn followed Jerec to Ruusan where the Valley was located. Maw was also beaten and killed, but Kyle's partner Jan Ors was captured by Jerec who appeared with his desciples and asked Kyle to join him. Kyle refused and was blasted back by Jerec. When Kyle Katarn's ship was destroyed on Planet Ruusan Boc started to mock him and was the one responsible for destroying Kyle's green lightsaber that originally belonged to Qu Rahn. However, his direct superior Sariss had enough of this and ordered him to go and inform their master Jerec that Kyle would be soon joining the dead. Boc laughed like a maniac and left leving Sariss and Yun behind where they were both killed eventually. Boc was the last of Jerec's disciples to survive and was tasked with guarding the prisoner Jan Ors, Kyle Katarn's friend, in the Valley of the Jedi on Ruusan. When Kyle found Jan and released her, Boc who was disguised as a statue, appeared and attacked Katarn, but after a fierce duel, he was killed.

Boc Aseca was the only minion of Jerec to wield two (purple) lightsabers and also one of the few to have mastery of Force Destruction, one of the most powerful Dark Side powers making him a very dangerous opponent. He is believed to be the third most powerful of the seven Dark Jedi after Jerec and Sariss, however he was no match for Qu Rahn and Kyle Katarn. 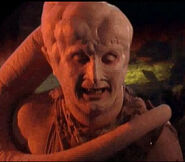 Boc with Sariss and Jerec.