Ruler of the Dark Forest

Be with Marianne forever (succeeded).

The Bog King is the secondary antagonist-turned-deuteragonist of the 2015 animated film Strange Magic. He is the evil King of the Dark Forest and the son of Griselda that wanted nothing to do with love.

Compared to the various other goblins and sentient creatures of the Dark Forest, the Bog King seems to be the most fairy-like anatomically. He has pale gray skin and icy blue eyes. His body covered in armor-like exoskeleton resembling decaying leaves and bark. His limbs are thin, matching the rest of his body, making him the tallest humanoid character in the film. He possesses ears, chin, and nose, matching his angular anatomy. He has four matching dragonfly-like wings on his back with various tears and imperfections that do not seem to impede his ability to fly.

In the film, the Bog King was first seen sitting in his throne, knowing about Sunny when he first set foot into the dark forest. When Sunny gets to the Sugar Plum Fairy, he learned that the Bog King had been keeping her and anyone falling in love period prisoners. By the time the potion was made, the Bog King and his minions crash a festival and had kidnapped a fairy named Princess Dawn. When some of the potion had rubbed off onto Dawn, he immediately couldn't stand her constant singing. While keeping her prisoner, it's shown that he began to grow fond of the charm she had made for him.

By the time Dawn's older sister, Marianne, came into the Bog King's territory, the two fought against each other. His mother revealed a tragic, yet embarrassing reason for his hatred for love was due to the fact that he couldn't find his own love back when he was young. When he had used the potion at a female slug, it didn't work due to his appearance and the fact that she was already in love with someone else. Overtime, the Bog King had come to realization that he and Marianne have a lot in common.

When Roland and his army invaded the castle, he was told to give him the potion or else. Upon refusal, he and Marianne fought against Roland. By the time his army made the castle collapse, the Bog King had supposedly fell to his death. However, when it turned out that he survived, he and Marianne had their true love's kiss, as well as having a change of heart. 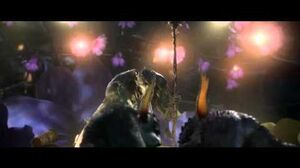 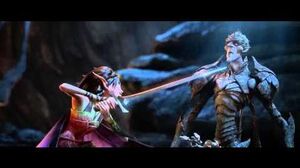